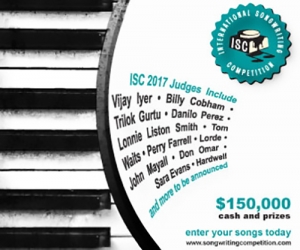 August 22, 2017  The International Songwriting Competition (ISC) is proud to announce its Jazz judges for the 2017 competition. Established in 2002, ISC is the worlds largest songwriting competition, receiving up to 20,000 entries from all over the world and representing all genres of contemporary music.

Tapped to judge the Jazz category this year are legendary artists Danilo Perez, Billy Cobham, Lonnie Liston Smith, and Vijay Iyer. Also participating on the panel is John Burk, President of the Concord Label Group, the independent label that has become synonymous with high quality jazz artists on their roster.

Our Jazz category has consistently been one of the best in the competition, and ISC is happy to be an advocate for this vital form of music, said Candace Avery, the founder and director of ISC. We are very excited to offer the opportunity for our entrants to have their music heard by such an esteemed panel of legendary jazz judges.

ISC is truly an international songwriting competition, receiving entries from 137 countries last year. ISC is open to all songwriters, amateur or professional.

A total of 71 winners in 23 categories share in more than $150,000 in cash and prizes, including an overall Grand Prize consisting of $25,000 (US) cash and much more in merchandise and services.

Entry information is available at https://www.songwritingcompetition.com.

The complete panel of 2017 judges include: