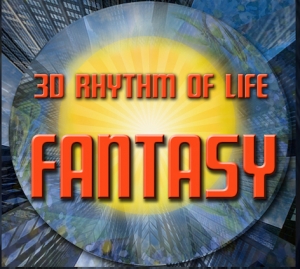 The album leads with a vibrant Latin-Tropical-Soul cover of Earth Wind and Fire’s international mega-hit “Fantasy”, sung by Nuyorican vocalist, Chris Alfinez, who has toured with Marc Anthony, Jennifer Lopez and La India. The video and single were released in late 2016, a few days prior to the passing of the dynamic founder of the legendary funk band, Maurice White— who penned the original hit over a three-month period, thus making 3D Rhythm of Life the first artist to present an official tribute.

“The story of 3D Rhythm of Life is one of evolution with respect for the past, the present, and a projection into the future. We feel Maurice’s life force each time we perform “Fantasy”. It’s an honor to share his transcending musical legacy through the genre of Latin-Tropical-Soul”, said drummer and bandleader, Michael Tate, 3D Rhythm of Life.

Michael Tate’s experience playing with the renowned international music group, Kid Creole and the Coconuts—whose fans included Michael Jackson and Prince, provided an excellent opportunity to perform and appreciate many styles such as Funk, Disco, Latin Tropical, Island and Big Band Swing.
Multicultural and bilingual, this accomplished eight-piece ensemble from New York City has been recording and performing as a collective for over a decade. “Fantasy” is their sixth studio album. 3D is the acronym for Diverse, Dynamic and Danceable, the band’s signature sound.

The group’s members have also shared stages with an array of musical luminaries. Co-Founder and guitarist, Chris Amelar is a William Paterson University graduate, and a well-respected teacher and author. Keyboardist, Lenny Underwood, has recorded and performed with chart-topping artists such as Mariah Carey, Whitney Houston, and Chaka Khan. 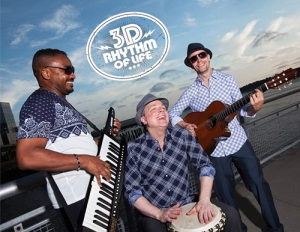 The sorcery of “Spell on You”, sung by celebrated Trinidadian musician Bonny Bonaparte (Bruce Hornsby, Spyra Gyra) elevates the groove with brilliant Reggae vibes. He also lends his ‘Island stylings’ to the politically charged “Things will Change”. The EDM Latin dance mixes, “Que Siga La Rumba” and “Oyelo”, are fueled by the energy of renowned Latin GRAMMY AWARD® winning singer, Herman Olivera, evoking an intoxicating trip to Havana’s hottest nightclub. “Quiero Saber”, the second single sung by Chris Alfinez, is a heartfelt, romantic Urban Salsa track.
“Fantasy” by 3D Rhythm of Life is available for purchase on all major music platforms and is currently in radio rotation. Follow 3D Rhythm of life on Instagram and use the hashtag #SLAMBASS. Enjoy the video for “Fantasy” on YouTube. For more information visit www.hear3dmusic.com.