After virtual performances due to pandemic, Jazz Arts Group eager for live appearances

During the coronavirus pandemic, the Jazz Arts Group helped audiences stay in touch with their inner Duke Ellington, Count Basie or Dave Brubeck. Thanks to limited-capacity concerts, a surprise visit by jazz great Wynton [...]

Here we are halfway through 2021, this year of stepping back across the threshold into the world. And what are we carrying with us as we emerge? Below, you'll find two dozen albums that [...] 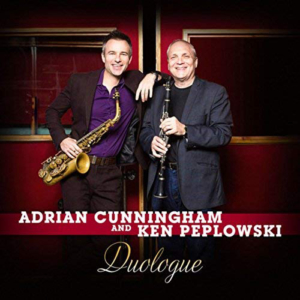 Clarinetist and tenor-saxophonist Ken Peplowski originally made his reputation as a brilliant swing player who was forward-looking and built upon the innovations of the past. Adrian Cunningham was born and raised in Australia and has been part of the New York jazz scene since 2008. He plays New Orleans jazz with Professor Cunningham and his Old School, has toured with Wycliffe Gordon, and is often heard in swing settings.

With all of that known, the music on Duologue is a real surprise. Cunningham and Peplowski are joined by a flexible all-star rhythm section comprised of pianist Renee Rosnes, bassist Martin Wind and drummer Matt Wilson. Rather than play the expected swing standards, they are heard on such modern numbers as Bill Evans' "Show Type Tune," Rosnes' "Jimmy Up Jimmy Down," Jimmy Giuffre's obscure "Ballade," and Warne Marsh's "Background Music" (which has a complex melody before becoming the chord changes of "All Of Me"). The two clarinetists (Peplowski also plays tenor while Cunningham contributes occasional bass clarinet and flute) sound like they could have been prized students of Lennie Tristano, stretching not only swing but bop into more abstract areas. Their melody statements (whether harmonized or rapid unisons) are quite impressive, and their solo styles are very complementary.

Among the other highlights are Cunningham's "Mozart After a Few Bars," Jobim's "Luiza," a rapid rendition of Fats Waller's jubilant "Alligator Crawl," and some surprisingly free moments on Matt Wilson's "Sonic Garden." Each of the dozen selections has its stirring moments and surprises as plenty of sparks fly.

Very much a collaboration (it can be difficult to know which clarinetist is soloing), Duologue is well worth several close listens. It is available from www.arborsrecords.com.