Austin, Texas -May 7, 2021 - Other than the way it started, there is nothing incidental about “The Show - Deluxe Edition”, Alan Goldberg’s latest EP release.

“It all started from a 40 second snippet of music that wasn’t used for a film intro”, Goldberg explains. “The film maker wanted something darker. I liked it and finished the song, which became “The Show:Redux”. It’s definitely not dark.  I thought about how the song could be played live as an intro to a stage performance.  I used a traditional jazz combo with keys, bass, drums, saxes, trumpet, trombone. That led me to thinking about other music played at a live show, but not as part of the performance.”

“Incidental music has a rich tradition of it’s own in theater. I thought about how people feel at, say, intermission, when nature urgently calls, or when they are chilling and zoned into their phone or consuming a tasty refreshment.  Then there is the end of the show. What about the curtain call?  People leave the theater differently. Some people rush out, others stay until the last note is played.  And of course there has to be an after party.” 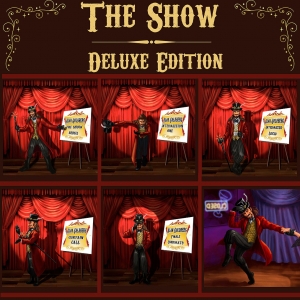 Goldberg created the songs around this theme of incidental music and that became “The Show - Deluxe Edition” EP.

The six instrumental jazz songs  came together during the pandemic, They feature Goldberg on keys and talented sidemen from around the country recording their parts in their own studios. All the songs have a relaxed, happy, toe tapping vibe.

“The Show - Deluxe Edition” is available on all streaming platforms May 7, 2021.