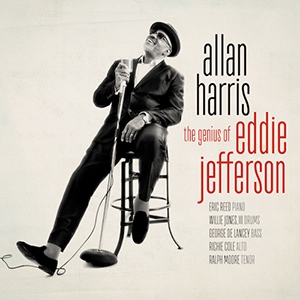 With his gruff, gravelly voice, his penchant for hep cat diction, and the serpentine bebop turns of his vocalese creations, the late Eddie Jefferson might not seem the ideal match for a classic romantic crooner like Allan Harris. The Brooklyn-born singer has previously paid homage to the songs of Billy Strayhorn and Nat King Cole, repertoire that seems like a more ideal fit.

Until embarking on the project that became The Genius of Eddie Jefferson, Harris would have agreed wholeheartedly with that assessment. "In my wildest dreams I never imagined I'd tackle Eddie Jefferson's material," he admits. "But once I started to sit down with his material and delve into what he was singing, it blew all of my stereotypes and prejudices out the window. How wrong I had been over the years not to give this incredible genius credit."

Not only did Harris discover the depth of Jefferson's estimable talents and innovations, but he found his own way into Jefferson's idiosyncratic takes on the classic solos of jazz giants like Miles Davis, Dexter Gordon, Lester Young and Coleman Hawkins. The Genius of Eddie Jefferson, due out April 27 on Resilience Music Alliance, is an ideal blend of Harris' rich, beguiling baritone and Jefferson's bantering cool. The album follows Harris into adventurous new territory, at once embracing the challenge and making these bop classics as embracing and celebratory as his takes on jazz standards and swooning ballads.

Harris didn't take the plunge alone. Though he'd previously covered Jefferson's most famous piece, "Moody's Mood For Love," he needed to plunge deeply into the singer's catalogue and methodology. Harris worked closely with pianist Eric Reed (Wynton Marsalis, Christian McBride) anAllan Harris d GRAMMY® Award-winning producer Brian Bacchus (Gregory Porter) to immerse himself in the tricky contours of Jefferson's work. "It was daunting," Harris says. "Sometimes it seemed like I was taking a master class at MIT. But I wanted to grow as a jazz vocalist -- I've done the American Songbook. No one has really tackled a full project of Eddie Jefferson's with the type of voice that I have, and I wanted to get it exact." 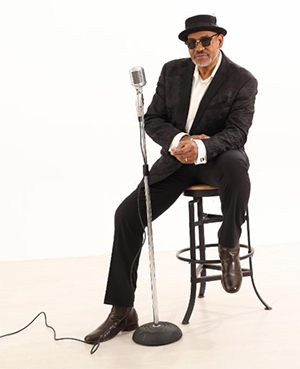 It helps to have a band that can provide the ebullient swing and fierce chops that can drive the tunes that Jefferson built his creations upon, and Reed assembled an ideal one: bassist George DeLancey (Houston Person, Tia Fuller), drummer Willie Jones III (Roy Hargrove, Arturo Sandoval), and tenor saxophonist Ralph Moore (Kevin Eubanks, Freddie Hubbard). The band is joined by special guest saxophonist Richie Cole, who worked closely with Jefferson in the singer's final years, up to the night of his tragic death outside Baker's Keyboard Lounge in Detroit.

"To have Richie Cole there was a blessing from above," says Harris. "His knowledge of what Eddie was doing was paramount because he was right there beside him. He not only gave me a pat on the back that was sorely needed, but he gave me a few pointers and a kind of permission to open things up a little bit to what I'm about."

In his liner notes, writer and musician Greg Tate compares Jefferson to such pioneering hip-hop lyricists as KRS One and Public Enemy's Chuck D, poets of the vernacular who could combine urban jargon and socially pointed messages. Harris agrees, saying, "Eddie Jefferson used the guise of his street language to create some really wonderful English literature on that stuff. Because his voice was so streetwise and rough, until you really listen to him in depth you don't understand that he was very erudite in his lyrical value. He didn't just rely on nursery rhyme rhythms and prose. He really dealt in some really hip street stuff."

He also celebrated the jazz musicians whose work he was repurposing, often painting musical portraits of these legends through his lyrics, as on the album's opening track, "So What." Following the lines of Davis' classic solo, he recounts a famous incident in which both the trumpeter and then-sideman John Coltrane left the stage mid-performance, deciding they needed a bit of extra rehearsal before resuming the show. Harris' rendition is soulful and warm, vividly capturing the vintage nightclub atmosphere.

For all his protestations, Harris has no problem with bringing the grit and funky edge to Horace Silver's "Sister Sadie" and "Filthy McNasty," or tearing his way through a blistering Lester Young solo on "Lester's Trip to the Moon." At the same time, he brings a heartbreaking tenderness to the classic "Body and Soul" and a down-home blues to "Memphis." He courses along with bop vitality on Dexter Gordon's lively "Dexter Digs In" and Charlie Parker's gymnastic runs on "Billy's Bounce." His romantic soul emerges on Duke Pearson's lament "Jeannine," while Cole's "Waltz for a Rainy Bebop Evening" is a wistful reflection on the music's rich legacy.

Despite his initial reluctance, taking on Jefferson's oeuvre has made an indelible mark on Harris as a singer. "This has tainted me," he says. "This feels so good, like reaching a high. Doing Eddie Jefferson's music has taken me out of the arena of being just the guy singing jazz standards in front of a smoking band, to feeling like a part of the band. It would be hard now for me to turn back."