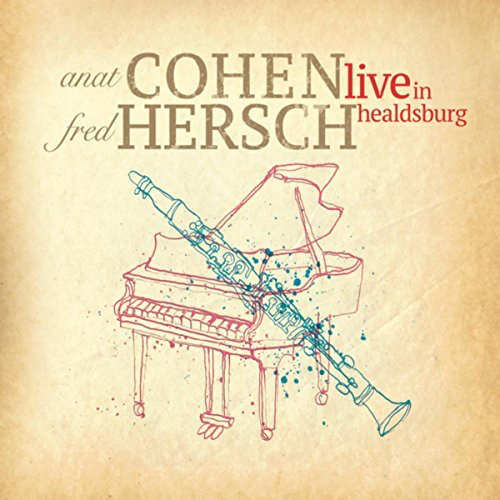 Anat Cohen, a superior clarinetist and tenor-saxophonist from Israel, and veteran pianist Fred Hersch have had very different lives and lifestyles but both have adventurous spirits along with complete command of their instruments. They had not worked together very often before performing and recording their joint appearance at the Healdsburg Jazz Festival in 2016 but on the resulting CD they sound as if they had played together all of their lives.

From the start of the first selection (Hersch's "A Lark"), Cohen and Hersch play off of and challenge each other as equals. Their improvising is quite spontaneous and, when one musician comes up with a fresh idea, the other either follows or builds upon the thought. All but two of the eight performances on this CD are over seven minutes long and yet the duo  never runs out of inspiration, momentum, or joy in the art of creativity.

They perform three Hersch originals including the playful "Child's Song" (which is sometimes a little reminiscent of Chick Corea) and "Lee's Dream." One could certainly imagine the latter, a well-disguised version of "You Stepped Out Of A Dream" (a theme only hinted at once at the end of the clarinet solo) being played by altoist Lee Konitz. Cohen contributes "The Purple Piece" and the musicians also explore Billy Strayhorn's "Isfahan," "The Peacocks," a liHAROLDve rendition of Fats Waller's "Jitterbug Waltz" and (as an encore) "Mood Indigo."

The music, which develops as it goes along, often heads in unexpected directions. While there is a basic structure, the musicians play thoughtful improvisations, come up with spontaneous ideas that often change the mood and direction of the music, and consistently surprise each other.

This is a set that rewards repeated listenings for there is plenty to discover and enjoy. Available from www.anzicrecords.com, Live In Healdsburg is well worth picking up.