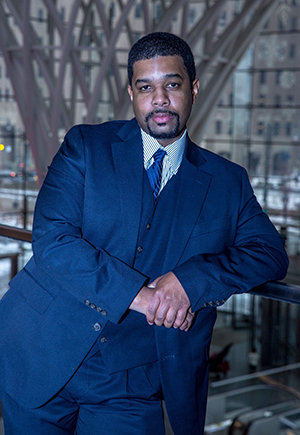 Andre´Joseph, a Staten Island, NY native had a love for movies from a very early age. He began his career making short films with family and friends on home video. Mr. Joseph attended the New York Film Academy summer program in 2001 where he first gained experience working with 16 millimeter film and later graduated Magna Cum Laude from Emerson College in 2006 where he received a Bachelor’s Degree in Film. During his time at Emerson, Mr. Joseph interned in television production with VH1 Classic in the summer of 2006.    In 2008, Mr. Joseph formed his own New York-based independent film production company, AJ Epyx Productions, LLC. The company’s first feature film, Priceless, which Mr. Joseph wrote, starred, and directed, premiered at Tribeca Cinemas and was selected for exhibition at the NY International Independent Film & Video Festival in 2009. His second feature film, Dishonorable Vendetta, was screened at the Urban Action Showcase in 2015 where it won the award for “Best Firefight.” His project, Vendetta Games, won the "Best Urban Action" award at the 2017 Urban Action Showcase.

Andre´s new short film is called “The Saxophonist” which is a romantic drama/musical about a struggling jazz player waiting for his big break to arrive. In the midst of losing his girlfriend and recording a demo record for a major label, he meets a ballet dancer named Adella who he has an instant connection with. When the label requires him to move to Los Angeles, Lonnie must choose between his music career and the girl who could be his soul mate.

"The Saxophonist"  truly captures the compound emotion and struggle of Lonnie Johnson.

Jazz Monthly: Making a film has many challenges. How long did it take to produce THE SAXOPHONIST from concept to finish? Tell us a little about the development and progression of this very touching film. When did you realize that this was actually going to happen for you?

Andre´Joseph: It was a 12 year journey for me going as far back as being a student at Emerson College. I had taken a History of Jazz course that taught me all about the legends from the music's humble beginnings to where it is now. I was also going through things in my personal life that inspired me to write a love story with jazz as a focal point by making the main character a saxophone player. It was originally intended as a student film, but I got sidetracked on other projects in school and in the years after I graduated when I started my professional career. Once in a while, I would have the spark to return to the script for rewrites. Then it was exactly 2 years ago when I decided to break away from the usual crowd-pleasing type of films I was used to making and wanted to produce a more personal project. I picked up the script after a long time not working on it and I realized how the themes of being a struggling artist in the big city became relevant in this current stage of my life.

JM: You wrote a very passionate script, now you have to visually interpret this story. Your Video Trailer definitely captures the compound emotion and struggle of Lonnie Johnson. What was your thought process behind this achievement?

AJ: I studied films such as BIRD, ROUND MIDNIGHT, and MILES AHEAD for inspiration in the way that they made jazz performances look exciting on screen. In my first round of storyboards, I envisioned Lonnie's musical performances as well as Adella's ballet dance performance to have a larger than life appearance that's almost like the audience watching a living dream as both artists are in their element. A great deal of credit to the look of the film has to go to my cinematographer, Charlie Williams. We both agreed to use the camera with stability as well as focus control for the performance scenes and more handheld, real world camerawork for the dialogue-heavy scenes. 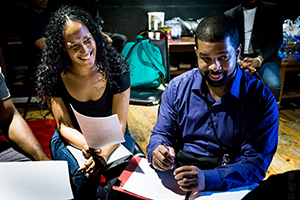 JM: The actor auditions are now completed and you made your choices. Now come the rehearsals. Do you have a specific method during run-throughs? How do you work with your actors? What is your course-of-action prior to the actual shoot?

AJ: We would do a full table read on the first rehearsal and then an actual scene rehearsal (also known as "blocking") for each scene based on the locations we had secured. For me, I can see the vision at first glance when an actor performs from the script. But once they're aboard, I tend to give them the flexibility to make the character their own by watching what they do instinctively in rehearsals and find their strongest attributes as actors to highlight. Some actors work differently from others of course. However in the case of Beavin Lawrence who was acting for the first time, we would do our own one-on-one rehearsals where we could talk about his personal experiences in relation to moments in the script. Then he can really find himself more confident in his performance when he would read with the other actors in the film.

JM: Is the joy for you in creating a film, in the editing room? Is that what you like most... or is it on set filming the scenes, with the actors? How would you describe the gratification between the two?

AJ: I would say there's a tremendous amount of joy in putting the film together in the edit where you see the story come together and laying the music on the picture is such an absolute delight. With production, however, there's always the challenge of staying on budget and schedule as well as juggling many personalities among the cast and crew. But I will say it's all worth while once I call 'action' and see my script come to life in the flesh. This film in particular was the most gratifying because of Beavin's music. Between him and the band he put together with Warren Byrd, Mark Johnson, and Eric Wheeler, our production team had the pleasure of hearing these cats give an outstanding performance that's equal to the worth of seeing any jazz legend live at the Blue Note. 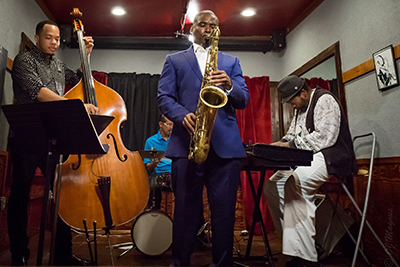 JM: Tell us about the music in this film. The exceptionally talented Beavin Lawrence not only stars in The Saxophonist, but also composed the music. How was the collaboration in discussing the musical treatment for the film? What steps were taken?

AJ: It was so important for me to cast a real saxophone player like Beavin in the role because I wanted the music to be as authentic as possible without overdubs. He had previously recorded an album back in 2008 called INFINITE POSSIBILITIES and he allowed me to use his tracks for the film. Each song choice we made was based on the mood of each scene. But when it came down to specific scenes where he performs live at home or in the jazz club, I took inspiration from ROUND MIDNIGHT director Bertrand Tavernier who had Dexter Gordon and his band including Herbie Hancock perform and record their music live on the set for the full authenticity of their sound. Recording live music was an aspect of the film where I put my full trust in Beavin who was a student of Jackie McLean at the Hartt School. He certainly gave me enough music choices to make this a longer picture! 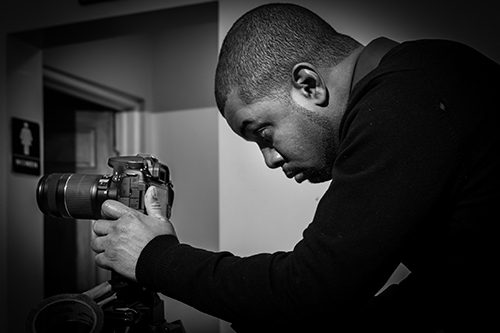 JM: Do you like to use multiple cameras on a specific scene or do you compose the shot/scene with one camera and design the lighting for that one-camera scene?

AJ: The plan was always to shoot the jazz bar scenes with two cameras because not only was it the most complex shooting day on the production but it was also necessary for having multiple angles of Beavin's live performance without making awkward cuts in the edit since the music was not going to be overdubbed. Everything else in the film was shot with one camera and specific lighting setups for each shot. Personally, while multiple cameras can save time, they can also be difficult to maneuver whenever you're trying to avoid visible crew, equipment, reflections, etc. 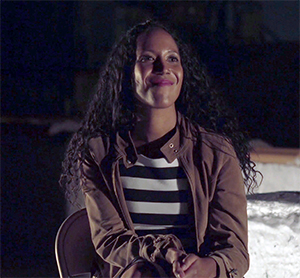 JM: "The Saxophonist" is a sponsored project of the "New York Foundation for the Arts." How did this come about?

AJ: My dad had a co-worker friend whose wife was part of NYFA's fiscal sponsorship staff. I met with the organization for an intro meeting to learn more about their program and how it would allow my project to have tax-exempt status for greater funding access to corporations and foundations. Anyone individuals supporting the project financially would have their donations be tax-deductible and allowed me to operate all production business through a project account. NYFA's biggest mission is to support independent artists that seek to create projects for public benefit and I believe their involvement in this film gave us a great deal of legitimacy.

JM: You've been making films for over 12 years. What are some of your past films and how were you inspired to do The Saxophonist?

AJ: My first professional film was a romantic drama/comedy called PRICELESS which was shot immediately after I graduated college. From there, I made a 80s-inspired crime thriller called DISHONORABLE VENDETTA and most recently completed the sequel VENDETTA GAMES. Both of those films won awards in the feature film category at the Cinemax-sponsored Urban Action Showcase. In addition to the jazz-related films I mentioned, one of my biggest inspirations for making THE SAXOPHONIST was the Ken Burns documentary JAZZ which I watched while I was in college. I felt a spark when I watched how Louis Armstrong, Duke Ellington, Charlie Parker, and Miles Davis among other legends pushed and innovated jazz music in their careers. That was something I could easily relate to as a filmmaker in need to tell a variety of stories while taking a fresh approach every time I stepped foot on a film set. I was also inspired by the film BEYOND THE LIGHTS when it came to the romantic aspect of my project because I connected to the career sacrifices that the main characters make in pursuit of their romance.

JM: You have acted and starred in previous films. Do you enjoy being an actor or do you enjoy a heightened creative energy behind the scenes as Director/Producer/Screenwriter? Do you still plan on acting?

AJ: I have a tremendous amount of respect for actors with their years of training, auditioning daily, and dedicating themselves to their craft. There's a joy in watching them work and put their full effort into a role that can sometimes be very surprising when they bring it to life. As a director and writer, I feel there's a great deal of positive selflessness to making actors look larger than life on the screen. As an actor, I enjoy performing when I can find a role that speaks to me and gives young people someone to look up to. The next project I plan to do is actually a western that I'll be starring in which will shoot the summer of 2019.

JM: What have you learned during your twelve-year career so far on being a happier and a more fulfilled film Director and Producer?

AJ: Everyone has a different voice in storytelling and a different journey towards success. When you learn to accept those individual aspects of yourself as an artist, you go after your dream all the way and never let anyone else's failure deter you from it. I've been blessed to have completed the films I made, won the awards I earned, and most importantly the privilege of working with some incredible people in front of and behind the camera. None of this could ever be accomplished alone. So I tell not only aspiring filmmakers but also aspiring musicians and actors to believe in their full unlimited potential, embrace challenge instead of avoiding it, and never forget your audience. 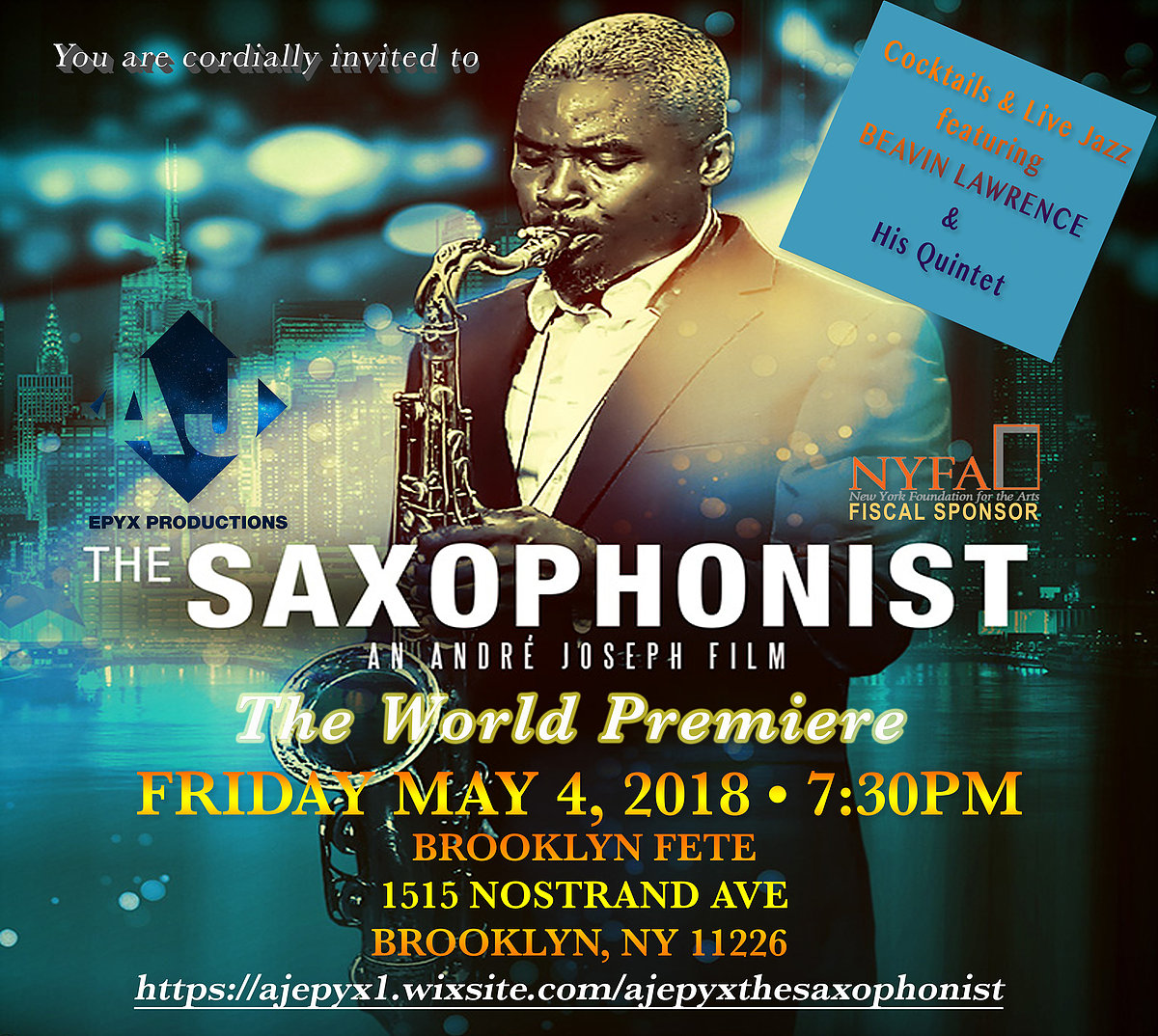