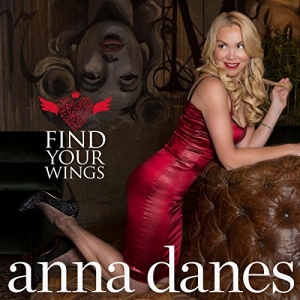 Emboldened by her own recent diagnosis, the chanteuse aims to empower and
educate others with “Find Your Wings.”

SAN DIEGO (XX August 2016): It was against all odds that Anna Danes found herself standing in Capitol Records Studio A, in front of the same microphone used by her role models, Frank Sinatra and Nat King Cole, recording an a cappella song that she wrote for her sophomore album. In the dimly lit studio in the heart of Hollywood, the woman who escaped communist Poland as a child and overcame the pain and loneliness of a loveless marriage by discovering her voice just three years ago poured her broken heart into the intimate album closer, “I Love You,” as producer Dave Darling sat spellbound at the recording console. In the famed studio during sessions financed by selling a car, Danes shared her deeply personal tales of love and loss through the six acoustic jazz songs that she wrote for “Find Your Wings,” the DLG

Records disc scheduled for release on October 14 that is completed by five standards and a stunning interpretation of blues singer Janiva Magness’ “When You Were My King.”

As Danes plotted with her marketing and promotions team to gear up for the upcoming album release, she was diagnosed with breast cancer. True to the theme of “Find Your Wings,” the positive-minded vocalist faced her worst fears, saw the silver lining and penned a motivational blog, “Cancer Part 1: Vanity Saved My Life,” to help educate and encourage others facing their own health and personal challenges (http://www.annadanes.com/2016/07/31/cancer-part-1-vanity-saved-life/).

When Danes began the recording project that was slated to street during National Breast Cancer Awareness Month, she had the desire to emulate the sound of a pair of jazz vocal albums from the esteemed duo of Tony Bennett and Bill Evans. Darling kept Danes’ captivating and expressive voice front and center in the mix using only sparse accompaniment from pianist Rich Ruttenberg, drummer John Ferraro and bassist Trey Henry. Blessed with a classic voice possessing charm, warmth, elegance and grace, Danes’ patient delivery and vocal phrasing uncoils with poise and complete control despite the vulnerability and intensity of her emotion-charged subject matter. Love is her ever-present muse on “Find Your Wings.” On originals, she sings a haunting melody on “The Voice,” pines hopefully on “See You In L.A.” and longs to see forever in the eyes of her lover on “Long Distance.” Among those she interprets from the Great American Songbook are Michel Legrand’s “I Will Wait For You,” Sammy Cahn’s “It’s Crazy” and Johnny Mercer’s “I Want To Be Around” while on the romantic duet “That’s All,” she takes enduring vows with Richard Shelton’s debonair tenor.

“I’m a very late bloomer in life. For the majority of my life, I’ve either had little confidence or have drafted off other people’s confidence and floated under their wings,” said Danes, who wrote the title track with Cindy Alexander. “Cindy asked me what I wanted to write about. I told her about my story post-separation and how I found my voice and confidence through music. Bam! That’s all that was needed to start the creative process. What was supposed to be a song about finding hope, turned into an anthem about finding yourself, your true purpose, your voice, your identity and so much more.”

Finding her voice has been life transforming for the former lawyer and stay-at-home mom who has called San Diego home for the past 16 years. Danes hopes to empower people to pursue their passions and dreams with the songs on “Find Your Wings,” which will also be the subject of her first book, personal growth products and motivational speeches on the corporate circuit. Via music, writing and speaking, Danes’ encouraging message is that by facing your fears - in health and any personal challenge – you can break out of your cage, find your wings and transform your life.

Although she sang as a child in church after arriving in Sweden and settling in Canada after escaping Poland with her parents in 1979, Danes didn’t sing again until 2013 when her young daughter cried boredom and refused to participate at a vocal lesson. Since the lesson was already paid for, Danes stepped in. She released her debut album that same year, “Longing,” which was an extravagantly produced and elaborately-orchestrated collection of standards and modern pop tunes. Her love of jazz spawned the mission to bring more live jazz to the San Diego area through her own event production and promotion company, which produces the Jazz on Cedros series. For more information, please visit