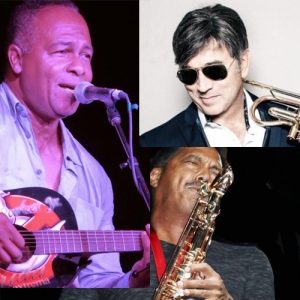 Rick Braun is a chart-topping trumpeter, composer and producer that is known for his impeccable technical chops, melodic wizardry and keen compositional prowess. This consummate Los Angeles based musician has been thrilling audiences for decades. Having achieved over twenty Number One Smooth Jazz Hits, Braun has collaborated with some of the biggest stars in contemporary jazz including Dave Koz, Boney James and Brian Culbertson and the biggest names in music including Rod Stewart, Tom Petty, Sade and Natalie Cole. This year Rick Braun released his 17th recording as a leader entitled “Around The Horn”.

Ray Parker, Jr. is a multi-talented artist - guitarist, singer, songwriter, producer and actor. Parker is known around the world for writing and performing the theme song to the movie “Ghostbusters”. In addition, he gained recognition in 1978 with the musical group “Raydio” with their hit “Jack and Jill”. In 1981, he continued his career as a solo artist and received a Grammy Award in 1984 for Best Pop Instrumental Performance. Ray Parker, Jr. has worked with some of the biggest names in the music industry: Aretha Franklin, Stevie Wonder, Chaka Khan, Tina Turner, The Temptations and more.

Hawaii’s International saxophonist Michael Paulo is one of the most versatile and cosmopolitan saxophonists in pop, soul and contemporary jazz for nearly 40 years and has added his distinct saxpertise to an impressive list of artists including Al Jarreau, Rick Braun, Oleta Adams, Kenny Loggins, Patti Austin, Jeffrey Osborne, Jeff Lorber, David Benoit, Bobby Caldwell, Johnny Mathis and more. Originally from Hawaii, Michael now resides in L.A., and comes to Hawaii to produce the finest smooth jazz concerts in the state.

Also performing in this special concert is an AllStar Band from Hawaii featuring Bruce Hamada on bass, Zanuck Lindsey on guitar, Michael Grande on keyboards and Garin Poliahu on drums.
The concert starts at 8 p.m. on September 30 at The Hawaii Convention Center – Liliu Theater and doors open at 7:00 p.m. Parking at the Convention Center is $10.00.

One Night Only! Don’t miss this incredible line-up of talented musicians on September 30!
Tickets available at TIX.COM