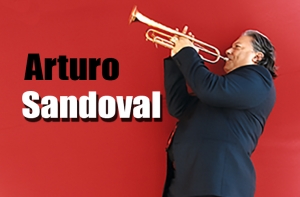 A renowned Jazz and classical trumpeter, a brilliant pianist, a stellar composer and arranger – a fine vocalist in his own right, a bandleader, and a tenured university professor of music. Arturo has won four Grammy awards, six Billboard awards, and an Emmy, this for his scoring of the HBO movie based on his life “For Love or Country: The Arturo Sandoval Story.”  The protégé of the legendary trumpeter John Birks “Dizzy” Gillespie, Dizzy was a huge supporter of Arturo and proudly features featured Arturo in his United Nations Orchestra.

Mr. Sandoval has performed at the White House also with the Boston Pops Orchestra, and at the Super Bowl. In fact I think it would be easier for me to list who Arturo hasn’t performed with, but just to mention a few, Arturo has performed with his great pal and kind of his adoptive father Dizzy Gillespie, Frank Sinatra, Michel Legrand, Johnny Mathis, Celine Dion, Stan Getz, Herbie Hancock, Woody Shaw, Tony Bennett, and recently with Alicia Keys and Justin Timberlake. We here at Jazzmonthly.com feel that if God did not create and give us Arturo as a musical gift on this earth than an Arturo Sandoval would had have to have been invented. Welcome to Jazzmonthly.com Arturo. 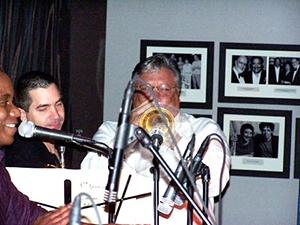 Arturo Sandoval (AS): Thank you very much. Wow, I’m very overwhelmed with such a beautiful introduction, oh my goodness.

Jazz Monthly: Well you deserve all of it, every bit of it my friend.

JM: Well let me just say we’re going to tell our people who might not know your background. Of course it all started musically for you when you were about twelve years old in the early sixties. How do you pronounce your province in Cuba?

AS: You say this really well Artemisa (ar-tay-MEE-sah).

JM: Artemisa in Havana province, Cuba, And I know you’ve played a lot of different instruments but you really fell in love with the trumpet, right, I mean when you first picked up a trumpet was it love at first sight?

AS: That was true, yeah. I started a little before; I think I was like ten years old, ten, eleven years old when I started music. They gave me a try in; it was a kind of marching band in my home village. Artemisa was in the province of Bernarde Rio. You know we were in the countryside of the island and the city hall started to put together like a kind of a marching band with a bunch of kids in it, and I joined those kids. I went to that place to learn to read the music and to play an instrument. They gave me few instruments to try but I always was looking for the trumpet with the corner of my eye.

One day I talked to the teacher and said, “Well I think I’ve made my final decision, I think I want to go to the trumpet,” and he said, “I’m so sorry I don’t think we have any trumpets left,” and I said “oh, my lord. What about if I find a trumpet, will you let me play it in the band?” and he said yes. Then my aunt bought me a cornet and I found someone in my village to teach me a little bit to play the instrument. One day I went to him and he said play something and I said, “no, I don’t know how to play anything I just got this instrument.” He was a cranky old man he said “I said play something,” I said okay and I played whatever came out of the horn and a few seconds later he said “You know what, don’t make me waste my time and I recommend you don’t waste yours; don’t even think about it, you should think about something else and don’t think about music or trumpet, you’re never going to make it.”

I was ten years old. Then I was walking home and I was crying all the way up until I get home. I was so lucky because when I got home I stopped crying and I got my little cornet out of the case and I went to the patio and I went down to the mango tree and I started to blow that thing until blood came out of my mouth and that was my cue. From then on, I tried to figure out how to make it sound better and I still try to figure it out how to make the sound out of that horn.

Jazz Monthly: Arturo, was part of it that you wanted to not prove him wrong, but he didn’t believe in you. I’m sure he’s lived that down many, many times after he heard of your incredible success.

AS: I learned a good lesson you know… nobody should say such a thing to a kid. You never know how the kid is going to develop. It’s unpredictable, you never know.

JM:  You’re long time friend and mentor, Dizzy Gillespie said this about playing the trumpet, “Some days you get up and you put the horn to your chops and it sounds pretty good and you win; some days you try and nothing works and the horn wins. This goes on and on and then you die, and then the horn wins.” (Laughing) That’s typical of Dizzy isn’t it?

AS: That’s very true, the trumpet is unpredictable, and it is a very tough instrument. That’s the reason he was an incredible trumpet player. He always said, “The mouth piece never smiles to your face.” (Both laughing)

JM: That’s right, it’s all you; it’s all your body. For good or for bad it’s you. That’s a good way of saying it Arturo. When you were about sixteen and still living in Cuba, and I know you were playing for the all-star national band, was it around that time when you became totally immersed with Dizzy – not knowing that Dizzy would become your adoptive father and you his adoptive son – and Charlie Parker, and Clifford Brown? Was it around your late teens when you really started loving Jazz in Cuba?

AS: Yeah, I was playing for quite a number of years, and the first thing that that I did was play a lot of traditional Cuban music in my village with some local bands. Then later on, I got a scholarship for three years to get Classical training to learn how to play Classical music. So far, I never heard Jazz at all… never before. When I got out of that school I started to play in a big band in Havana, that was my first visit to the Capital, and a journalist, who was an Aficionado-of-Jazz and he played a little bit of saxophone, he talked to me once and he said, “Did you ever hear Jazz Music?” I said no, what is that? Then he said, “Come with me,” and he played for me a record of Dizzy Gillespie and Charlie Parker.

That was it!  That was the thing that really changed my way of thinking of music completely. From that moment on, I start to think about how to learn how to play that kind of music. I still have that mission of how-to-play-Jazz. How to: understand Bebop, how to play those chords, and be able to handle your instrument, and say something when you are inventing and putting together those phrases. It still fascinates me! I enjoy playing that music so much; I full believe that to play Bebop correctly you have to really be very dedicated. You have to really, at least try to master your instrument because it is such a challenge for any instrumentalist… but that challenge is good for you… because that pushes you and forces you to keep practicing and keep improving, keep growing and learning, studying… which is a daily mission, you know. 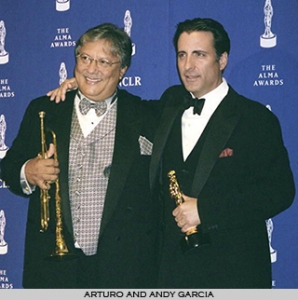 JM: One thing that we have to mention, of course, is the HBO movie “For Love or Country” which really was the Arturo Sandoval story. One of the things that you said just made me laugh. You were saying that you were really glad that Andy Garcia was playing you because you said that he would be your first choice because: “First of all he’s Cuban, he’s a musical guy, he’s very good looking and that makes me look even better in the movie.

JM: That was great. Now what made that happen? Andy was the executive producer too, wasn’t he?

JM: One of the greatest lines… I’m paraphrasing, I’m not saying it exactly… but when Charlie Dutton who played Dizzy was with you and you weren’t sure you could go on tour with Dizzy, and Dizzy’s response was something like “Arturo, your sound doesn’t belong to you, it belongs to the world.” What a great line!

AS: It’s a good line, that’s one of the lines in the movie, yes.

JM: Yes, and I was really touched by that.  That really is your story, isn’t it, do you feel that?

AS: Oh, no it is, it’s not fiction, it’s not like an invented story, it’s based on the reality, you know, the real story.

JM: I know that you and Marianela spent a lot of time on the set of the movie. Now tell us Arturo, (Laughing) was it kind of strange seeing people playing you?

AS: (Laughing) You know, we are not prepared for that; we never will be, you know… but it’s a privilege… an honor to have such a beautiful tribute, and most of the time when they do that, they wait until people pass away.

I always say whatever you want to give to me; please give me it now before I pass away. (Both laughing)

We were all the time, there, trying to help and do whatever we could do to make it authentic, I was hired to do that, as a consultant, to be sure that everything that was said or done was according to reality.

AS: You know… dreams are free… you know we always dream. What is going to happen is in the hands of God. The only thing you should do is: try as good as you can to do what you have to, be serious about your profession, and study, and practice, and concentrate on what you’re doing, and don’t get involved in weird, strange things… and if you do all of those things, maybe God will come help you.

JM: When I saw you at the Iridium and the Blue Note, one thing I really liked was your showmanship, you know, the way you go back and forth…

AS: when you are on the stage you have to be grateful and you have enjoy yourself and let everybody know you are having fun.

JM: Absolutely, and you make us have a lot of fun too.

JM: You sure do, Arturo.
So in closing, I just want to say thank you so much for sharing.

AS: You’re very, very welcome, and thank you because you make wonderful questions and it was very nice and I enjoyed myself doing this.