BASSEL AND THE SUPERNATURALS – New Video – Sneak You In 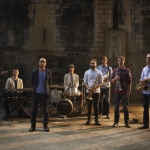 BASSEL AND THE SUPERNATURALS
PREMIERE NEW VIDEO "SNEAK YOU IN"

Chicago-based funk phenomenon, Bassel and The Supernaturals, have unveiled a new music video from their forthcoming full-length, Elements. The album is expected for release February 17, 2017. The video features footage of the band through recent years, rehearsing, performing and evolving as a group. As Bassel and The Supernaturals recently and unexpectedly lost their bassist, this video is an especially emotional piece for them.

A Syrian-American himself, Bassel has lost several family members as a result of the Syrian crisis and knows too well the toll that displacement takes. He's dedicating his artistic vision to meaningful effect. The band will donate 20% of proceeds from their album pre-order campaign to Karam Foundation for humanitarian relief in Syria. Once they're reached their goal, they'll donate 40% of all additional contributions. The campaign ends on January 31. Additional philanthropic incentives are offered.