Convene as a Trio for the First Time Ever on the 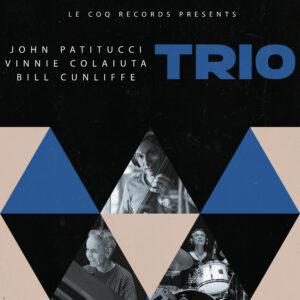 Three veteran jazz virtuosos join forces for the first time as pianist Bill Cunliffe, bassist John Patitucci and drummer Vinnie Colaiuta for a high-spirited, vigorously swinging standards session titled, simply, Trio – after all, with three names like those on the marquee, no further embellishment is needed.

Trio, due out February 19, 2021 via Le Coq Records, came together spontaneously, making the exhilarating chemistry and dynamic interplay all the more remarkable. Cunliffe has become something of a house arranger and musical director for many of the newly-launched imprint’s projects, and Patitucci and Colaiuta have quickly become part of the Le Coq family. It was at label founder/producer Piero Pata’s urging that the trio let loose in Hollywood’s storied Capitol Studios without a script.

“Piero surprised us as we were working on some other projects with him,” Patitucci recalls. “He had the idea for us to do this trio record. It was very impromptu, like in the Blue Note record era, where you basically do a record in a day. We had a lot of fun and it was really relaxed.”

“I was like a kid in a candy store,” gushes Cunliffe. “It was pretty challenging because it just three guys in a room. But it was a lot of fun, because these are two master musicians whose work I’ve loved for years.”

A GRAMMY® Award-winning arranger, Cunliffe typically embarks on a project with far more preparation. Since beginning his career as pianist and arranger with the Buddy Rich Big Band, Cunliffe has worked with such luminaries as Frank Sinatra, Joe Henderson, Freddie Hubbard, Benny Golson and James Moody, while establishing himself as a renowned solo artist and bandleader with more than a dozen albums under his name. All of which made this recording a daunting but ultimately thrilling experience – in the making as much as in the listening.

“I like jazz music that has shape,” Cunliffe explains, “that has a beginning, middle and end, and drama. Usually I craft those elements in my arrangements. John and Vinnie are able to create those qualities on the spot.”

Patitucci may be best known for his long and meaningful associations with Chick Corea and Wayne Shorter, but he’s worked with a who’s who of artists in and outside of jazz. With Corea he came to prominence as a member of the pianist’s Akoustic and Elektric Bands; for the last two decades he’s been a member of the Wayne Shorter Quartet alongside pianist Danilo Pérez and drummer Brian Blade, perhaps the most revered small band in jazz today. But he’s also played throughout the world with Herbie Hancock, Stan Getz, Pat Metheny, Wynton Marsalis, Joshua Redman, Michael Brecker, McCoy Tyner, Nancy Wilson, Sting, Aaron Neville, Natalie Cole, Joni Mitchell, Carole King, Astrud and Joao Gilberto, and many more.

Colaiuta has also bridged the worlds of jazz and pop throughout his career. He rose to fame playing with Frank Zappa, Joni Mitchell and Sting, while touring with jazz greats from Herbie Hancock to Chick Corea. He’s also a prolific first-call studio drummer whose work graces recordings by Leonard Cohen, Barbra Streisand, James Taylor, Billy Joel and countless others.

Patitucci and Colaiuta are no strangers to one another, of course. Colaiuta is one of three drummers on the bassist’s self-titled debut album on GRP from 1987; they’ve crossed paths scores of times over the intervening decades, including as a version of Chick Corea’s Akoustic Band that recorded Live From the Blue Note Tokyo in 1996. Cunliffe has worked with both of them at various times as well, but Trio marks the first time they’ve been able to interact as a trio.

“Both John and Vinnie have spent a lot time in different aspects of the pop world,” Cunliffe says. “But they both grew up in jazz like I did. They’re both stone cold jazz guys.”

“Working with Bill Cunliffe,” Colaiuta says, “you can always expect – at the very least –amazing skill and professionalism, some deep swinging, and a big bucket of fun!”

The tone for the session is set with the trio’s sprightly take on George Shearing’s “Conception.” Introduced by a brisk solo shot by Colaiuta, the tune sparks, nimble, graceful solos from all three members, all clearly in upbeat spirits. It’s followed by a swooning version of David Raksin’s classic theme from “Laura,” a more winsomely romantic interpretation than the noir-tinged usual.

They then delve into the repertoire of Patitucci’s longtime bosses for a steely plunge into Wayne Shorter’s “Anna Maria” and a graceful rendition of Chick Corea’s “The One Step,” on which the bassist speaks with eloquent lyricism. Colaiuta’s rifle-crack rhythm sets the pace for a blistering run through the Miles Davis favorite “7 Steps To Heaven,” while the drummer’s lush, whispering brushwork conjures a cloud-soft foundation for Cunliffe to ruminate nostalgically on the classic ballad “Good Morning Heartache.”

The camaraderie that the three locked into so quickly and (seemingly) easily is playfully evident on their loose, celebratory spin on the well-worn standard “My Shining Hour,” while their taut link-up braces a slyly grooving rethink of Thelonious Monk’s “We See.” The album concludes on a wistful note, with a tender but lively “Just In Time.”

The mix of standards and songs familiar to the trio’s members was not only a practical consideration given the impromptu nature of the session, Cunliffe explains; it was key to capturing such brilliantly conversational playing. “Except for ‘The One Step,’ we did all of the tunes from memory, without using any music at all. That means we were able to look at each other, hear each other, challenge each other and react to each other in the moment. It felt very organic and was so much fun. Vinnie and John really lifted me and made me play better than I ever could.