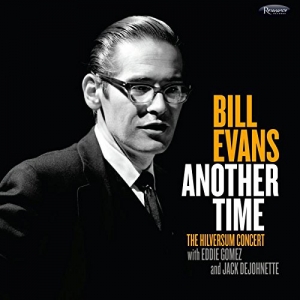 It is fair to say that there is no shortage of Bill Evans recordings available. In addition to the release and reissue of virtually all of his studio recordings, there are an apparently unlimited supply of live recordings, both legitimately issued and bootlegs.

Even with all of the Evans CDs, Another Time is something special. While the pianist had Eddie Gomez as his bassist for a decade, drummer Jack DeJohnette was a member of the trio for just six months. Originally only one album, At The Montreux Jazz Festival (recorded June 15, 1968), was released by this group. In 2016 producer Zev Feldman, George Klabin and the Resonance label for the first time came out with Some Other Time, a formerly unknown studio album by the trio that was recorded just five days after Montreux, on June 20.

And now arrives The Hilversum Concert, which was performed in Holland on June 22, two days after Some Other Time. Due to the looseness of the trio, faster tempos than usual, and the superior recording quality, this is arguably the most rewarding of the three recordings.

With his very original chord voicings and the close interplay that he had with the members of his trios (particularly his bassists), Bill Evans has been a very influential force in jazz since 1960. In the 1950s, nearly every up-and-coming pianist sounded a bit like Bud Powell but that era ended with the rise of Evans. In the decades since his premature death in 1980, Evans’ impact on pianists and jazz in general has continued to grow.

The Hilversum Concert is filled with exciting performances. The first three selections, “You’re Gonna Hear From Me,” “Very Early,” and “Who Can I Turn To,” are all taken faster than usual. Evans sounds exuberant, Gomez is quite active behind the pianist, and DeJohnette keeps the music swinging and stimulating while mostly playing at a low volume. “Alfie” is taken at a more conventional tempo but with Evans’ playing being particularly enthusiastic. “Embraceable You” features virtuosic playing from Gomez who is in the lead throughout. The bassist also has a memorable spot on a surprisingly cooking version of “Nardis” (which includes a fine DeJohnette drum solo). Also on this CD are a heartfelt rendition of “Emily,” a swinging “Turn Out The Stars,” and Evans’ closing theme “Five.”

As is usual with the releases of the Resonance label, the packaging is impeccable. The 36-page booklet, in addition to discussing the background of this release, has insightful interviews with Gomez, DeJohnette and pianist Steve Kuhn.

The Hilversum Concert is a major find and a must for all Bill Evans collectors. It is available from www.resonancerecords.org.