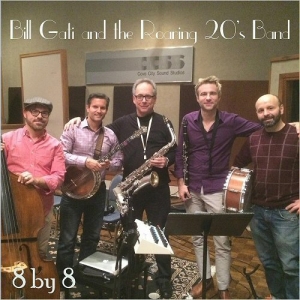 20's Jazz has returned. Bill Gati & The Roaring 20's Band is leading the charge on the revitalization of this forgotten genre. Why not? Throughout the generations we have witness Doo Wop, Motown, Punk Rock, and 80's Freestyle die out. Just as of recently, Chip Music (form of EDM), Gabber (another form of EDM), and Grunge (a form of rock & roll), died out. It's due time to welcome back the old time 20's Jazz genre. The popular culture is ready for this unexpected comeback. 20's Jazz is reminiscent of Big Band, Ragtime, and Dixieland.

For those who are confused, 20's Jazz is also comparable to Contemporary, Smooth, and Vocal Jazz. Who better than Bill Gati to lead the charge on this new renewal? Bill Gati (who initially trained as a classical pianist) has studied and practiced jazz since the age of eight. Throughout his career, he has worked on Broadway, played gospel music in church venues, and has performed with numerous musicians. Along with the Roaring 20's Band, we have ourselves a dream team of jazz musicians who are fully capable of reviving a music genre.

Jazz innovators unite - William Gati, Adrian Cunningham, Martina DaSilva, Vinny Raniolo, Charlie Caranicas, Rob Garcia, Chris Pistorino, and Harvey Tibbs, together form Bill Gati & The Roaring 20's Band. The live events and recorded commercial albums the band produces are phenomenal. Likewise, the lifestyle and story of the musicians itself are fascinating. For example, Bill Gati has performed at the Queens County Farm Museum. He played at the Episcopal Church of the Resurrection in Kew Gardens, New York. He performed at the renaming of Forest Park Drive in New York with Councilperson Liz Crowley, all in the past few months.

The album 8 by 8 (Bill Gati & The Roaring 20's Band) was produced mostly improvised without retakes and consists of eight songs created within eight hours. The album 8 by 8 was recorded at the Cove City Sound Studios with the help of John Arbuckle and Richie Cannata. Considering Bill Gati's social circles, he must network with more talent in a day than most musicians experience their entire career. This sage of the jazz field enlightens us with his wisdom and knowledge. You do not need to be a professional musician to appreciate such escapades.