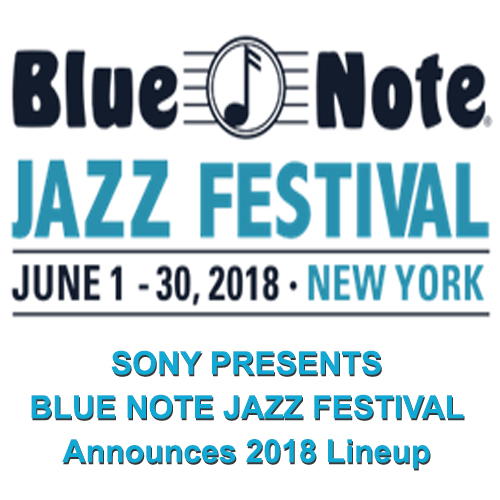 New York, NY - May 10, 2018 - With over 100 events in five venues throughout New York City, the 2018 Sony presents Blue Note Jazz Festival will take place June 1-30, 2018. Sony Corporation is the Festival's Official Title Sponsor and INGLOT Cosmetics of Poland is the Presenting Sponsor. Ticket information and a current schedule of events are available on the festival's website, www.BlueNoteJazzFestival.com. Additional performances, venues, and events will be announced in the coming weeks.

Earlier this year, Sony and Blue Note announced a landmark sponsorship agreement resulting in the creation of a new Manhattan venue, Sony Hall, in addition to Sony's title sponsorship of the festival. Located in the heart of New York's Theatre District (235 W. 46th St at the Paramount Hotel), the space was previously known as the Diamond Horseshoe (est. 1938) and is the newest addition to Blue Note's New York City properties, joining this year's festival venue lineup for the first time, expanding its city-wide takeover. The 12,000 square-foot venue is a platform to showcase Sony's new and exciting audio and video technologies. The multi-dimensional audio technology installed in Sony Hall will provide audiences with a groundbreaking immersive music experience that is the first of its kind for a music venue anywhere in the world.

The festival also welcomes INGLOT Cosmetics of Poland for the inaugural year of their multi-year official presenting sponsorship of the event. In celebration of the partnership, Blue Note Entertainment Group and INGLOT will release a limited edition Blue Note-branded cosmetic collection, as well as special showcases of iconic Polish jazz musicians for the festival. Performances include esteemed Polish pianist Wlodek Pawlik and his trio with special guest Randy Brecker on Monday, May 28th as well as acclaimed jazz fusion band Walk Away on Saturday, June 23.

"2018 is a paramount year for the festival," says Steven Bensusan, President of Blue Note Entertainment Group, "Our new partnerships with Sony Corporation, INGLOT Cosmetics of Poland, the Delegation of the European Union to the United Nations and its associated member states and organizations have allowed us to expand our global footprint and collaborate with different industries to produce an extra special event for fans and artists alike. We are extremely grateful for their contributions and are excited to work together to extend the festival outside of New York City and showcase some of the most talented musicians from all over the world. We are also excited to present some of the industry's biggest icons this year including Chris Botti, Art Garfunkel, Gregory Porter, Al Di Meola and many more."

Please visit www.BlueNoteJazzFestival.com for the most current public lineup and schedule.