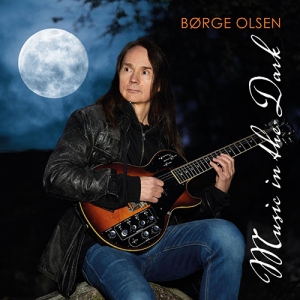 “Music in the Dark”

“Music in the Dark” presents brand new recordings of Børge Olsen’s songs from today and back in time. None of the songs has ever been released before.
His music is a mix of jazz rock, prog and metal. The title track “Music in the Dark” Børge composed in 1982 when he made an instrumental version of it on a tape recorder, but few weeks later he called Pete Basinger to join in with his vocal and lyrics and the song “Music in the Dark” was borned. More than three decades later Børge recorded the song all over, but he kept the vocals from the tape with Pete from ‘82. It’s unbelievable that the old tapes survived 38 years kept in Børge’s garage. This song has a mystic vibe to it, and it’s almost like Pete is singing about what’s happening in the world to day – way back then, when they were just teenagers. “Skvulp” Børge composed in 1985, and he used to play it live with his own bands like Flekken Band and Børge Olsen Band. ”Story” was made in the 90s and Børge played it live with Olsen Electrix and X3. All the other songs on the album is brand new.

Join Børge Olsen on a musical journey through music you’ve never heard before, via prog, rock and fusion with screaming guitars and ultra fast runs. Børge has a strong left hand technique and he always avoids tapping. Where other guitarists have to use both hands for tapping, he manages to do the same with only one hand. Børge is known for his extreme self-developed legato technique, and a super fast and precise picking technique. He has a distinctive passion and feeling in his guitar playing, which makes the music extra atmospheric.
https://www.facebook.com/BorgeOlsenOfficial/