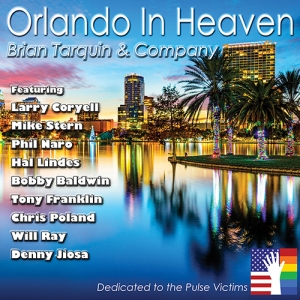 Says Brian, "Being a Floridian I was moved so much by the Orlando Pulse Shooting, in fact my family and I were in Orlando at the time of the shooting. When I found out that Catholic Charities of central Florida was helping out survivors, I immediately went into action to compose and produce an album to benefit the victims and was very fortunate to work with Larry Coryell on the release before he passed!"

"Brian is a very good guitar player, the 'Godfather of Fusion' gives him an A plus and his musicians too. The song that I played on, 'Pulse 49' is a beautiful piece of music We artists have to do everything we can to educate, enlighten and inspire the world in which we live." - Larry Coryell

June 12th marks the one year anniversary of this tragedy, and a portion of the proceeds from this release will go to Catholic Charities who provide case management and support services for victims and family members!

"While dangerous and difficult to musically express tragedies such as the 2016 Pulse nightclub shooting in Orlando, Florida, producer/guitarist Brian Tarquin's deft casting (guest stars include the late Larry Coryell and Mike Stern), buoyant yet reverential jazz-pop-fusion songs, and emotional guitar playing make Orlando in Heaven a fitting tribute to those who lost their lives for merely being themselves." - Michael Molenda, Editor in Chief, Guitar Player magazine

Says Multi-Grammy Nominated Guitarist Mike Stern, "Brian is a really good cat! I really enjoyed and had fun playing on the track 'Kinda, Sorta' which is very well done. The whole project is for great cause!" Renowned vocalist Phil Naro adds, "I'm always willing to help out for a great cause without the expectation of receiving anything in return. I'm hoping for this release 'Orlando In Heaven' to touch the hearts of millions people and heal the family and friend who have lost love one's in this tragic situation." 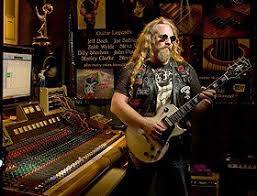 Brian Tarquin - In his studio

Multi-Emmy Award winning Brian Tarquin is an established top rate composer/guitarist. He has won 3 Emmy's for "Outstanding Achievement in Music Direction and Composition for a Drama Series" and has been nominated for an Emmy 6 times. In 2016, Tarquin's release "Guitars For Wounded Warriors" was nominated for Best Album by the Independent Music Awards, which showcases Tarquin's guitar prowess along side such world-class shredders as Steve Morse, Billy Sheehan, Gary Hoey, Bumblefoot (Gun n Roses), Reb Beach (Whitesnake), Hal Lindes (Dire Straits), Chris Poland (Megadeth) and Chuck Loeb (FourPlay). In 2006 SESAC honored him with the Network Television Performance Award. Tarquin has graced the Top Billboard Charts with such commercial releases as: "This is Acid Jazz," "Vol. 2," "Sweet Emotions," and "Bossa Brava: Caliente" on Instinct Records, followed by several solo jazz albums, which charted Top 10 at Smooth Jazz Radio. Brian has appeared on 36 releases, selling over 140,000 records in his career.

"Brian Tarquin is back with a vengeance and a hunger to help the victims of the most heartless and deadliest shooting attack in America. Employing his blisteringly superb fretwork as a call to love and service, Brian once again has assembled a crack ‘seal team like' army of the finest pickers and singers to produce a sublime collection of heaviest sonic healing and hope songs you'll ever be likely to hear." - Hal Lindes (Dire Straits)