BUDDY RICH – The Channel One Set 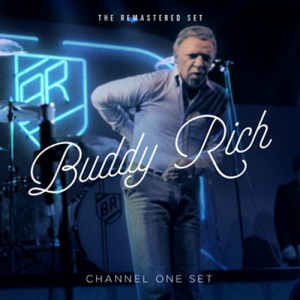 In Honor of the Buddy Rich Centennial Celebration

Studio City, CA - Lightyear Entertainment and Lobitos Creek Ranch, in association with Scabeba Entertainment and the Buddy Rich Estate, have announced the release of two new live albums featuring Buddy Rich and his Big Band, both recorded in 1985 on two nights at the King Street Studios in San Francisco. The digital albums are being released on September 15, 2017, as part of the Buddy Rich Centennial Celebration. Buddy was born on September 30, 1917.

The albums are the soundtracks from two concert films, The Channel One Suite and The Lost Tapes, which have been available from Lightyear on DVD since 2003 and 2005, respectively. The sound recordings from these concerts have never before been available as audio albums or as digital films for rental, sale, or streaming.

Gary Reber, subsequently the founder of Widescreen Review was the Producer of the concerts. One Pass Video was the Production company. Scott Ross of One Pass was the Director. A complete jazz club was built in the soundstage for the production to a live audience. The recordings were originally made in SQ Tate Matrix Quad Surround Sound.

The soundtracks have been re-mastered for digital release by Chad Hailey and Jeff Pinn at Broken Arrow Sound, Redwood City, CA.

The Channel One Suite has been retitled The Channel One Set, referring to the set list that Buddy and his Big Band performed the night it was recorded. The two films have been remastered for digital release by Sergio Hernandez at Bitmax Hollywood.

The two audio albums will be released on September 15, 2017 through Caroline Distribution, the independent distribution arm of Universal Music Group, on the Lightyear/Lobitos Creek label. The digital films are scheduled for November.

A vinyl LP of The Lost Tapes will be released as well, tentatively scheduled for January.

The title The Lost Tapes refers to the fact that these recordings were lost for a decade, presumed damaged in a fire, and then digitally restored.

“These recordings are some of the best quality recordings ever made of the legendary drummer and his band,” said Arnie Holland, CEO of Lightyear. “And we are grateful to Executive Producer Steve Michelson and the inimitable Cathy Rich for 14 years of working together with us to make sure that Buddy's legacy is complete and widely available.”

Cathy Rich, CEO of Scabeba Entertainment and Buddy’s daughter, is guest vocalist with the Buddy Rich Band featuring drummer Greg Potter. The 16-piece Big Band has been touring all year, and will perform at the Catalina Bar and Grill in Hollywood on October 2.

Buddy Rich, whom Gene Krupa defined as “the greatest drummer to ever draw breath,” was honored with a President's Special Merit award GRAMMY along with three Grammy Nominations. He was inducted into the Downbeat Magazine, Modern Drummer and Playboy Halls of Fame. Buddy received the Jazz Unlimited Immortals of Jazz Award and awards for his philanthropic efforts. He was named “Greatest Drummer of All Time” by Modern Drummer magazine.

In honor of Buddy's Centennial, a flag will be flown over the U.S. Capitol on Buddy's birthday, September 30, when the commemoration of his Centennial will also be read into the official Congressional record where it will be a permanent part of the United States archive for all time.

Lightyear Entertainment, a distributor of independent films and music, was founded in 1987. www.lightyear.com