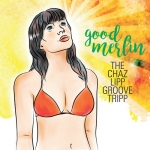 Chaz Lipp has been honing his craft for years, largely staying on the periphery of Seattle’s jazz community. Years of tutelage under the late Northwest Jazz legend Don Lanphere fostered Chaz’s unerring knack for wringing optimal emotion from his sax. The idea for this album blossomed following a Gilda’s Club benefit show that featured Sanjaya sitting in with the Groove Tripp. The chemistry between Chaz’s often frenetic style blends perfectly with Sanjaya’s soothing melodicism.

Sanjaya Malakar is best known for having been a finalist on American Idol in 2007. Though no stranger to standards (his “Besame Mucho” on Idol wowed guest mentor Jennifer Lopez), Sanjaya hasn’t previously been associated with jazz. Expect that to change with the release of Good Merlin. He puts his own stamp on chestnuts like “Georgia On My Mind” and “Nature Boy,” infusing these classic tunes with fresh vim and vigor.

“Our main goal in recording this album was to lay all our passions on the line,” Chaz says of Good Merlin, “The power of the feelings expressed will hopefully resonate with the broadest range of music lovers.”

Why the title Good Merlin?

“The initial thought was to call it ‘Good Morning,’ because the music welcomes listeners like the warmth of the dawning sun,” Chaz explains, “But that wasn’t quite strong enough. ‘Good Merlin’ is basically ‘good morning’ with a magical twist.”

Veteran producer Gary Lanz (known for numerous projects with his brother—New Age superstar David Lanz) proved a simpatico choice for collaborating on the album’s sound. He and Chaz sought to preserve the spontaneity and grit of the studio sessions. Gary was also a collaborator (along with pianist Charlie Hiestand) on the album’s original instrumentals (the title track and “Groovy Green Eyes”).