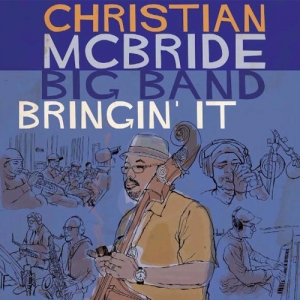 Iconic bassist Christian McBride has been doing what the title of his upcoming big band album implores for years: Bringin' It. This highly anticipated release, which follows the Christian McBride Big Band's 2011 Grammy® Award-winning debut, The Good Feeling, puts his status and skills as an all-around entertainer on full display. With a list of growing accolades including his recent appointment as Artistic Director at the Newport Jazz Festival, hosting shows on SiriusXM ("The Lowdown: Conversations with Christian") and NPR ("Jazz Night in America," as well as frequent online contributions to various programs including "All Things Considered"), speaking engagements, and occasional DJ performances under the alias DJ Brother Mister, he's more than just a bandleader: Christian McBride is transcending that title to something more complete.

If it is true that jazz is a sponge for musicians to absorb and then squeeze out what they hear to produce their own sound, McBride has been "bringin' it" for quite a long time. From his amazing quintet, Inside Straight, to his avant-garde leaning quartet, New Jawn, the contemporary sound of his fusion group, A Christian McBride Situation, to the critically acclaimed music he's made with his trio, the bassist has always disseminated his own unique 360-degree view of jazz.

While the music played by the Christian McBride Big Band is on the cutting edge of 21st century large ensemble music, the orchestra's presentation, like its sound, respects the past while looking forward. Danny Ray, the legendary stage announcer for James Brown, travels with the group to give the leader an old-school intro before playing his thoroughly modern music. "I love having the show aspect of it as well, with Danny Ray there, and being able to create somewhat of a show while also having Melissa there as our vocalist," says McBride.

That would be Melissa Walker, who graces Bringin' It on two tracks: "Upside Down," originally done by Brazilian superstar Djavan, and the unlikely slick arrangement of "Mr. Bojangles." In addition to maintaining a career in jazz, Walker is also the co-founder of Jazz House Kids, the award winning jazz education center... and she's Mrs. Christian McBride.

Only two tracks on this 11-song set were not arranged by the leader: the "Upside Down" arrangement was contributed by Norman Simmons, while "Optimism" is from the person he's known the longest in his band, trombonist Steve Davis. Davis has the distinction of being the very last Jazz Messenger that Art Blakey hired before he died in 1990.

"I saw that last Jazz Messengers band that Steve was in," McBride remembers. "Blakey was a huge influence on me and because of that, Steve and I share the same compositional and arranging DNA. You see, even though I've been influenced by every great big band and every great arranger I've ever heard, three of my greatest influences -- not just as composers but also as improvisers -- are Freddie Hubbard, Wayne Shorter and Cedar Walton. I mean before, after and during the period when they were with Art Blakey & the Jazz Messengers."

McBride played bass for Freddie Hubbard's quintet for nearly three years starting when he was 18. One of the songs he loved to play with the legendary trumpeter was "Thermo." A few years ago he brought this arrangement to a gig with Wynton Marsalis and the Jazz at Lincoln Center Orchestra. When the four trumpeters had to work hard to go over the riffs in the tune, McBride felt a certain pride. "I just thought that Freddie was somewhere up in heaven laughing," says McBride.

Perennial poll-topping arranger Maria Schneider has also been an influence on McBride. He cites times when he'd just bug her for hours, peppering her with questions, particularly on a recent trip to Europe. He honors her with his rendition of "I Thought About You." "She has an arrangement of 'Giant Steps' where she arranged the melody over a D pedal so I said let me try something like that," McBride recounts. "That's where that came from. She really gave me a lot of information and has been a great influence on me."

Another aspect that has helped the bassist find his voice as an arranger is the fact that, except for drummer Quincy Phillips, this is the exact same band that recorded with him six years ago. "These guys know my sound. They know my style. They know what my compositional and arranging DNA is. I've been able to keep the exact same unit, so like Duke Ellington used to do, I can write for my guys because I know their sound and style.

"As for my originals, they all have been recorded with my small groups," he continues on about the tracks "Gettin' To It," "Youthful Bliss," and "Used 'ta Could." " As an arranger I'm still in the early stages of my development so it seems to me the best way to really make my hopeful ascension into a better arranger is to obviously take a song I've already written and try to add to that and make it a worthy large ensemble song."

While the Wes Montgomery smoker "Full House" isn't a McBride original, it is part of his development as an arranger -- it's a big band chart he first created for guitarist Russell Malone at Jazz Aspen in 2009. He says he's tweaked it since then for his go-to guitarist Rodney Jones. For the McCoy Tyner classic "Sahara," the bassist channeled his 20+ years of playing with the legendary Chick Corea, for which McBride won two of his five Grammys®. Another one of his Grammys® came from a co-op project with Tyner. "I always thought of Chick, in his early years, as being a branch from the tree of McCoy Tyner, if you will," he commented.

McBride's work ethic is evident in the challenge he set for himself on the steamy old ballad "In The Wee Small Hours of the Morning." "I decided to torture myself by writing that arrangement in the key of B. To me that's a very pretty key, but it is a very hard key for a double bass because I get to play no open strings," McBride explains. "When I play it live, every bass player in the house comes to me and says, 'is that in B? Why do you do that?' Maybe it's because I'm crazy, but I really wanted to do something difficult and keep myself on my toes."

Planning to keep this group simmering while he simultaneously resurrects his Inside Straight band and introduces his new trio, Tip City, McBride is most excited to embrace the golden age of big bands while they continue bringin' it with more gigs and their first European tour. "With my big band I try to combine all of my journeys and goals as a musician and then try to put it in a wrapper of show business," the five-time Grammy® Award-winner comments. "I really think in that sense I'm following something of a big band tradition."