COUNT BASIE ORCHESTRA – Makes History With All About That Basie 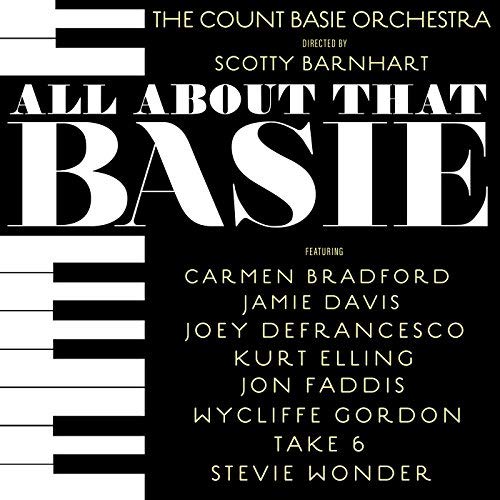 Legendary artists have come together to join the Count Basie Orchestra under the direction of Scotty Barnhart for this historic release.

The album was produced by eight-time Grammy award winning producer and former Basie drummer Gregg Field. Field notes that common throughout the entire album is that great Basie sound. “Basie’s band throughout the years was able to successfully cover hits of the era with their sound and as part of the new album we have continued that tradition including hits from legends like Stevie Wonder and Leonard Cohen as well artists as contemporary as Adele,” Field said.

All About That Basie opens with a foot stomping, swinging version of the Joe Williams classic, “Everyday I Have the Blues,” featuring multi-Grammy winning vocal group Take 6 adding their contemporary vocal arrangement on top of the classic Basie hit.

When incorporating new material into the Basie repertoire, Barnhart says: “I look for tunes with singable melodies and interesting harmonies. Rhythmically, the orchestra is going to take care of the rest…”

The album continues with Stevie Wonder’s classic “My Cherie Amour” masterfully arranged in the style of the Basie / Neal Hefti classic, “ Lil’ Darlin’ ” and features Stevie Wonder on harmonica. “My Cherie Amour” (ala Basie) is a perfect example of All About That Basie “pop” repertoire re-imagined in timeless Basie style.

Elling’s love for Sinatra is on full display with the Basie band all the while making this new recording uniquely his own. The track also features producer Gregg Field in his roll as former Basie and Sinatra drummer. A place he knows very well.

Next up the band revisits its 1950’s & 60’s ventures into “Latin” music with the classic hit “Tequila.”  The track features trumpet virtuoso Jon Faddis, weaving Dizzy’s love of “Latin Jazz” into his stratospheric solo as well as solos by the band’s own Will Matthews on guitar and Bobby Floyd on piano. “Tequila” also features the legendary Chick Corea percussionist/ conguero Luisito Quintero.

The next re-imagining of a classic and adding to the “new” Basie repertoire is the Leonard Cohen signature song “Hallelujah.” Arranged by the band’s own Kris Johnson, this soulful and understated version perfectly reflects the original spirit of the song with Leonard Cohen’s message soulfully interpreted by Mark William’s plunger muted, trombone solo.

To celebrate “April in Paris” and Basie’s often overlooked organ recordings, Hammond B-3 virtuoso Joey DeFrancesco joins for his second time recording with the band following his debut on the Concord classic “Ray Sings / Basie Swings.”

The long-associated pairing of Ella & Basie is celebrated on the next track with the Basie band’s own vocalist Carmen Bradford, debuting a never before recorded arrangement of “Honeysuckle Rose” written for Ella by long time collaborator Benny Carter. Bradford is a master of the art of singing with 18 men swinging and she delivers a playful love letter to Ella.

The last “new” addition to the Basie orchestra book is the Adele hit “Hello,” demonstrating once again that the Basie sound remains as unique and relevant as ever.

“Hello” features a trumpet solo by arranger Kris Johnson as well as a highly stylized piano solo from the band’s own Bobby Floyd delivering Basie’s signature “splank” at the end to remind us that once again it’s all about that Basie.

Going all the way back to the band’s Kansas City roots, and to celebrate the great Basie band vocalists, Basie alum, big baritone Jamie Davis continues the tradition with a reprise of Jimmy Rushing’s hit “Sent For You Yesterday,” this time with the small band featuring leader Barnhart, Field, Eric Reed, saxophonist Rickey Woodard, and bassist Trevor Ware.

All About That Basie concludes with the great composer Thad Jones’ message “From One to Another,” which is a perfect metaphor to close the album.

The metaphor being that the Basie Orchestra is passing along the art that Basie created along with all of his musicians, the arrangers and artists who continue to collaborate with this timeless American musical treasure that is now known simply by the all encompassing “Basie.”

All About That Basie is exactly that. It celebrates the past, the present and assures a swinging musical future for all…