“Getaway Car”...”Junkyard Dunebuggy”...”Engine 71”...For Dave Koz and Cory Wong, there’s a method to the freewheeling madness in titling three key tracks from their high octane, rock/soul/jazz on fire dual album The Golden Hour with a vehicular theme. 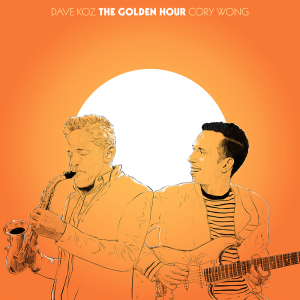 It’s the veteran saxophonist/entrepreneur (Koz) and hipster funk/jam band rhythm and lead guitarist’s (Wong) spirited attempt to capture in words the hard-edged spontaneous combustion and wind in your hair carefree coolness that’s possible when musical masters of two different generations venture fearlessly off their regular career paths, hightail it into a live in the studio (though socially distant), session with a powerhouse ensemble, and - with cameras rolling to chronicle every transcendent detail - create a momentum shifting project that puts them on fresh creative trajectories.

While the lockdown year of 2020 was a challenging time for musicians everywhere, both Koz (a nine time Grammy nominee) and Wong (a 2021 Grammy nominee for Best New Age Album) used the months away from the road to gift their fans with an incredible amount of exciting new music.

The saxophonist celebrated three decades since the release of his self-titled debut album with the presciently titled A New Day, a collection fully created in quarantine featuring a host of legendary R&B and contemporary jazz collaborators, including Brian McKnight, Jeff Lorber, Rick Braun, Bob James and David Sanborn. Wong played electric guitar on “Still Got It, a track featuring Antwaun Stanley of the mega-popular funk band Vulfpeck, whom Wong has toured and played a sold out Madison Square Garden with. A New Day marked Koz’s 20th Top 5 on the Billboard Contemporary Jazz Albums chart.

The prolific Wong, who is usually on the road with his own band and others 100-150 days a year, used his at home studio time to record and release an impressive array of EP and LP projects – including Meditations, Elevator Music for an Elevated Mood (featuring Koz on the tracks “Restoration” and “Watercolors”), Trail Songs: Dusk, Trail Songs (Dawn), The Syncopate & Motivate Tour (two live sets), The Striped Album and Cory Wong and the Metropole Orkest Live in Amsterdam (conducted by Vince Mendoza). The guitarist followed these in early 2021 with Cory and the Wongnotes, featuring music from his newly launched innovative variety show web series on YouTube of the same name.

As Koz was gearing up for the October release of A New Day with weekly releases of lead singles and colorful accompanying videos, he and Wong prepped for the recording of The Golden Hour in the guitarist’s hometown of Minneapolis with a live full band performance in front of a socially distanced crowd of 150 behind Crooner’s in Fridley, MN. The show included a five piece horn section arranged by Prince’s chief horn arranger Michael Nelson.

The two had written the 10 original songs for the project over four days in February 2020, assuming they would be part of a “Yesterday and Today,” where he’s been, where he’s headed style double CD collection celebrating Koz’s three decades as a smooth jazz icon. The pandemic lockdown necessitated a logistical and creative shift, and the concept evolved from a Dave Koz project featuring Cory Wong to a full-on dual album.

Besides the social distancing aspect of recording ten people at once in a relatively confined space, one of the most unique aspects of the live recording experience at Creation Audio in Minneapolis was documenting every detail with a crew working with four cameras – an element intrinsic to artists of Wong’s generation, and one that Koz had not only never worked with, but could scarcely imagine having back when he launched his career.

In addition to the 10 original tracks, the ensemble jammed on an amped up version of Koz’s trademark hit and showstopper “Together Again,” complete with a blistering extended drum/sax improvisation with Petar Janjic. Wong and Koz had played it live once before, blowing away a packed house at NYC’s Bowery Ballroom.

“Recording The Golden Hour was the most fun I ever had in the studio, and also the most terrifying, but in a good way because it was all about being vulnerable and having to stand on my own musical instincts with everyone jamming on the arrangements at the same time,” the saxophonist continues. “Add to that those four cameras in my face, making me aware that I better nail every note and make it look effortless even though it was not. The key was rising to the occasion while trusting Cory and the musicians...they did not let me down.”

Every superhero tale, even the musical ones, have an origin story, and the saga of how Koz and Wong came to be aware of each other, do a deep dive, develop a mutual admiration society and a musical and personal friendship is an inspiring one for the ages. Growing up in Minneapolis, Cory’s dad exposed him to classic rock and jazz and, fascinated by the Red Hot Chili Peppers and Primus, decided to play bass and start a punk band. Smooth jazz was hardly on his radar, yet he remembers watching a late night dating show on MTV, seeing Dave’s musician brother Jeff Koz trying to impress a date by telling him about his famous sibling and taking her to a show. That was Wong’s first exposure to Koz, and he grew up aware of Koz as “that sax guy” in the cultural zeitgeist.

A longtime fan of ‘sax and drum’ duets due to his obsession with Maceo Parker, Wong was on the road at an Airbnb with band members one night in 2018, scouring the internet for such performances. He came across a video of Koz jamming with a drummer at a festival. His response: “Dang! This dude is dope!” One of the musicians scoffed, “Isn’t he the smooth jazz guy?” Wong was vaguely aware that Koz specialized in slickly produced radio hits, but saw and heard a whole other side of him crushing it on the soprano. The guitarist started that deep dive into the Koz catalog and watched more videos and became a quick fan of the live charisma and energy the saxophonist put into those performances.

When he learned about those perennially sold out Koz cruises (usually in warm climes), Wong devised a crafty plan that might get him out of Minnesota’s frigid winter for a week or two. He wanted to make Koz aware of him and set an intention of one day playing on one of those ships. Wong engaged his fans in his campaign, asking them as he performed throughout the Midwest and East Coast to shoot clips of his “smooth jazz adjacent” live playing on their phones and tag Koz when they posted them to social media. The campaign was successful and Koz wondered who all these people were and why were they so enamored of Wong. Koz decided to check out the guitarist for himself and was immediately drawn in.

Koz was Mr. Smooth Jazz and Wong was an emerging hero on the funk/jam band circuit, but the two had a lot in common musically – and got “roped into” each other’s musical universes quickly. “It’s all about exploration,” Koz says. “The Golden Hour is on the edge of the day and night, just like we’re both on the edge of what is expected of us at this stage of our careers. Sometimes collaborations are completely transactional but our friendship ensures that this incredible album isn’t just a one-time merger of musical forces. It’s the starting point of a whole new journey where we solidified our mutual and complementary artistry. I’m happy to say we’re already writing new songs for collaborations to come!”