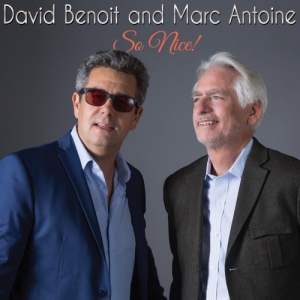 Music has an unparalleled ability to stir the emotions, awaken memories, and transport the heart and mind to new dimensions. Multi-Grammy nominated pianist/composer/film scorer David Benoit and acclaimed guitarist/composer Marc Antoine manage to do all of the above on their Shanachie debut So Nice! A founding father of contemporary jazz, David Benoit is celebrating his 40th year as a recording artist and has collaborated with everyone from The Rippingtons and Faith Hill to David Sanborn and CeCe Winans. Parisian born guitarist/composer Marc Antoine, also a premiere architect of contemporary jazz, has worked alongside such diverse stars as Sting, George Benson, Cher, Dave Koz, Everette Harp and Celine Dion. Benoit and Antoine first recorded together in the late 90s and finally have the opportunity to record an entire CD together on the wonderfully romantic So Nice! Their new collaboration sizzles with rich harmonies, dancing rhythms and soaring melodies that create the perfect opportunity for the duo to explore their shared passion. "I have loved Brazilian Bossa Nova ever since I first heard Stan Getz and Jao Gilberto together," confides David Benoit. "But when my parents took my family on a holiday trip to Rio de Janeiro, I really fell in love." Marc Antoine adds, "My mentors were Andrés Segovia and John Williams and then I heard Baden Powell play this hybrid classical and Brazilian music on the guitar and I fell in love with Brazilian rhythm."

Shanachie Entertainment VP Of Jazz A&R Danny Weiss states, As great as Marc and David are as individual artists, what's mind blowing about this album is the brilliance and sheer beauty that they create together. In their case 1+1 equals 10!" Veteran manager, A&R guru and seasoned drummer Bud Harner was the vision behind So Nice! "Having worked for many years with David, both on the management side, A&R side, and even back in my playing days, I knew he loved Brazilian music and has recorded many Bossa Novas in his career," shares Harner. "I thought the perfect guy to team up with David would be Marc Antoine who I had also worked with many times. Marc has incorporated Brazilian music in many of his recordings and is always distinctive and the consummate pro at making great sounding records. So, the three of us got together and decided to make a fun, acoustic, pared down Brazilian style record. No programming, overdubs, basically a live-in-the-studio recording. I'm very proud of the result and of being a part of this album!"

So Nice! is an inspired collection of original Bossa Nova-inspired compositions that includes two popular Brazilian standards. David Benoit invites a few dear friends and top call studio musicians to round out the date including drummer John "JR" Robinson (Daft Punk, Michael Jackson, Chaka Khan), bassist Ken Wild (Barbra Streisand, Al Jarreau, Gloria Estefan) and percussionist Luis Conte (Phil Collins, Pat Metheny, James Taylor)."It was magic in a way," says Mark Antoine. "It was also very easy to work with David as we both like to leave some space for instant creation. We only got together and spoke on the phone a few times. After that the band made the magic happen." Benoit adds, "Marc and I have the same approach to music - to find the passion and let it happen. It was so easy and delightful working with Marc. Nothing was ever over-thought, it just evolved naturally."
So Nice! opens with Marc Antoine's playful, cool and breezy French Café. Antoine and Benoit's virtuosic and percussive interplay create a euphoric affair that sets the perfect mood for the excursion ahead. Benoit takes us to the heart of Rio de Janeiro for his "Penthouse In Copacabana." The breathtakingly beautiful melody, which is propelled by Antoine's guitar and the driving rhythm of John "JR" Robinson and Luis Conte, easily conjure images of high-rise buildings overlooking the awe-inspiring turquoise waters. SoNice! also features the 1962 Antonio Carlos Jobim classic with lyrics penned by Vinicius de Moraes, "Só Danço Samba (also known as 'Jazz 'N Samba')."
Benoit and Antoine break into a jubilant flow and create one of the album's high points as they soulfully stretch out and prove why they are at the top of their game. "We decided to go for a live feel for the recording process, throw great musicians together and record live in a great studio," explains Antoine. "This is why there is so much chemistry on this record." The album's title track is the second and only other cover on the CD. Benoit's agile and sailing solo followed by Antoine's more bluesy attack work to perfect effect on the ear-catching arrangement.

Renaissance man David Benoit has built an enviable career taking chances. Drawing inspiration from jazz, the comics, symphonies, film, Broadway and beyond, there does not seem to be anything he cannot play. The Los Angeles raised pianist was bitten by the jazz bug in 1965 after watching a Charlie Brown special on television and hearing the music of Vince Guaraldi. He would go on to study music theory, composition, film scoring and conducting at UCLA. A pioneer in contemporary jazz, Benoit who is celebrating four decades as a recording artist continues to build on his legacy. Highlights from the chart-topping pianist's catalogue includes the recordings Freedom at Midnight(1987), Waiting for Spring (1989), Shadows (1991), Letter to Evan (1992, a tribute to Bill Evans), Here's to You, Charlie Brown: Fifty Great Years (2000). Benoit has also recorded two albums with guitarist Russ Freeman Benoit/Freeman Project (1994) and 2 (2004). His discography also includes the recording American Landscape (1997) and Orchestral Stories (2005), which featured his first piano concerto and symphonic work. Benoit's 2012 CD Conversation garnered three Grammy nominations and 2 In Love(2015) joined him with vocalist Jane Monheit.Benoit's film scores include The Stars Fell on Henrietta (1995), produced by Clint Eastwood, and The Christmas Tree, produced by Sally Field, which was voted 'Best Score of 1996' by Film Score Monthly. The dynamic artist has served as conductor for numerous symphonies including the Los Angeles Philharmonic, Asia America Symphony Orchestra and the London Symphony Orchestra. A long-time guest educator with the Mr. Holland's Opus Foundation, he received that organization's Excellence in Music Award in 2001. Benoit also currently hosts a morning radio show on KKJZ 88.1 FM in Long Beach, CA.

Revered for his soulful elixir of exotic textures and fluid artistry, guitarist Marc Antoine has been a force of nature on the contemporary jazz scene for over three decades. Classically trained at the International School of Classical Guitar, Antoine was first widely introduced to audiences in the late 80s when he hit the road with Basia. Loved for his unique fusion of classical, jazz, soul and world influences, Antoine quickly became a mainstay on radio and the international touring circuit working with everyone from Sting and Cher to Marion Meadows, Rick Braun, Dave Koz and countless others. Through the years, Antoine has also been first call for the popular Guitars & Saxes All-Star tours and cruises. Some of the standouts in his illustrious recording catalogue are Gypsy (1995), Madrid (1998), Universal Language (2000), Cruisin' (2001), Mediterraneano (2003), Modern Times (2005), Foreign Exchange with Paul Brown (2008), My Classical Way(2010) and Guitar Destiny (2012) and Laguna Beach (2016). In 2012, Antoine faced health challenges, as he had to undergo major heart surgery and then in 2014, after several misdiagnoses, had surgery to relieve cramping in his hand caused by a condition called "Trigger Finger." One of his fingers on his left hand kept getting stuck in an odd position, causing unbearable pain when he would play the guitar. Overcoming these challenges, Antoine is back in top form. The consummate artist recently relocated back to Southern California after living in his wife's hometown of Madrid for over a decade.
David Benoit and Marc Antoine's aspirations for So Nice! are so simple. Benoit shares, "I hope my fans will experience a different side of my music and feel my love for Brazilian music and my love affair with the acoustic guitar." Marc Antoine concludes, " I want people enjoy listening to the music as much as I enjoyed making this music with my friend. I am sure they will be able to make their own story for each and every song on the record. It is music therapy and this one is a good one! So, lets get our wine bottle opener ready!"
Shanachie Entertainment