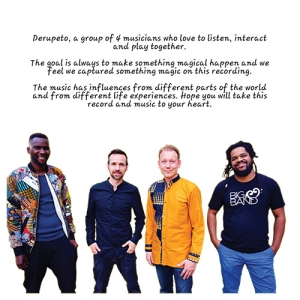 The band Derupeto was started when Gothenburg guitarist Tobias Grim put the members togheter for a gig at the club Glenn miller in Stockholm and they felt they could create something unique together.

Derupeto has previously played at the Copenhagen Jazz Festival and done many appreciated concerts in Sweden.
Now finally comes the group's debut album on Nobelstreet records. Derupeto Quartet consists of Deodato, Rubem, Peter and Tobias, 4 exciting musicians who complement each other and mix African, Brazilian, Swedish and American influences in their original music.

The band's debut album was recorded in Nobelstreet studios in Gothenburg and mixed by Åke Linton.