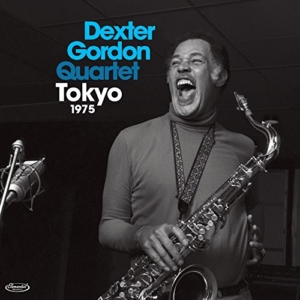 One of the all-time great tenor-saxophonists, Dexter Gordon (1923-90) had a fascinating life that someday should be made into a movie. After stints with the big bands of Lionel Hampton and Louis Armstrong in the early 1940s, he joined the Billy Eckstine Orchestra and became one of the first tenors to master bebop. Gordon's recordings from the second half of the 1940s and his legendary Los Angeles jam session battles with Wardell Gray and Teddy Edwards gave him fame in the jazz world. Unfortunately drug problems made the 1950s and erratic time for him but he kicked them, signed with Blue Note, and made a complete comeback by the early 1960s. Finding reception to his music more favorable in Europe, he lived overseas for 15 years. Gordon returned to the U.S. in triumph in the mid-1970s. His health gradually declined but he had one last hurrah, getting an Academy Award nomination for his role in the film Round Midnight.

Tokyo 1975 is a previously unreleased set that has been out by Elemental Music (www.elemental-music.com). The first four selections have Gordon joined by pianist Kenny Drew, bassist Niels-Henning Orsted Pedersen and drummer Albert "Tootie" Heath in a performance from Oct. 1, 1975. While he often played with the quartet in Copenhagen, this set was performed in Tokyo. Gordon is in excellent form on "Fried Bananas" (his original line over the chord changes of "It Could Happen To You"), a medium-tempo "Days Of Wine And Roses," "Misty" and "Jelly Jelly." The latter has Gordon taking a surprising and effective vocal. While not really a singer, he puts plenty of spirit into the performance and takes a jubilant solo on the blues.

Also included on this CD is a version of "Rhythm-A-Ning" with the same trio (except Espen Rud is on drums) from 1973 and a later rendition of "Old Folks" from 1977 with pianist Ronnie Matthews, bassist Stafford James and drummer Louis Hayes.

The recording quality is pretty decent, the playing is top-notch and it is always a joy to have a "new" Dexter Gordon recording. His fans will want this one which has excellent liner notes from his widow Maxine Gordon.