DIZZY GILLESPIE, CONCERT OF THE CENTURY – A Tribute To Charlie Parker 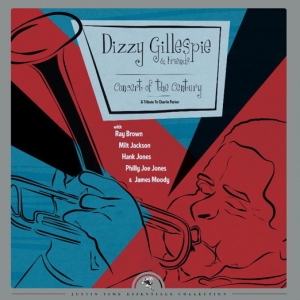 DIZZY GILLESPIE, CONCERT OF THE CENTURY

A Tribute To Charlie Parker

In Nov. 1980, an all-star sextet filled with classic veterans performed at what was billed as “Concert Of The Century – A Tribute To Charlie Parker.” While the heading was not exactly accurate since there were more significant concerts in the 20th century and none of the songs played was actually composed or clearly associated with Parker, the performances (only previously available on a limited-edition Lp) are quite rewarding.

It would be difficult to improve upon the lineup which consisted of trumpeter Dizzy Gillespie, James Moody on tenor and flute, pianist Hank Jones, vibraphonist Milt Jackson, bassist Ray Brown and drummer Philly Joe Jones. The first five musicians came to maturity during the classic bebop era more than 20 years earlier while Jones, a slightly offbeat but inspiring choice for the drum chair, became famous a decade later as Miles Davis’ drummer.

While Dizzy had begun to gradually fade as a trumpeter starting in the early-to-mid 1970s, he sounds very much in prime form on a superior revival of “Blue ‘N’ Boogie” (which is up to the level of his playing in the 1950s), a rapid “Get Happy,” and a swinging version of “The Shadow Of Your Smile.” James Moody is in the spotlight on his blues “Darben The Redd Fox” and the first half of “The Shadow Of Your Smile.” Moody and Hank Jones are surprising on the latter, beginning the piece playing quite free before the theme emerges. Milt Jackson (showcased on “If I Should Lose You”), Hank Jones and Ray Brown (who is in the spotlight during a medley of “Manha de Carnaval’ and “Work Song”) are also well featured while Philly Joe Jones adds a lot of fire to the music.

Concert Of The Century is available from www.justin-time.com and well worth picking up.