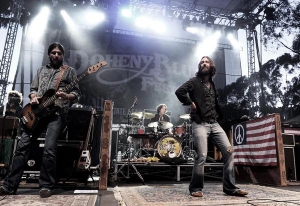 In 1998, Omega Events launched an annual blues festival in the harbor town of Dana Point, CA and nearly twenty years later, The Doheny Blues Festival has grown into one of the nation’s top blues music festivals, known for the stellar mix of artists and the incredible location of Doheny State Beach. Omega has been recognized by the blues music industry, being named “Best Promoter” by The Blues Foundation in Memphis, TN.

The layout of the festival offers something for everyone, as two main stages are placed at opposite ends of a large grass field, both within 100 yards of the Pacific Ocean. An intimate, third stage, known as The Backporch, is a great venue to get up-close to your favorite artists. There is also an International Food Court, Microbrew tastings and large Vendor Village. The grass field at the north end of the park (where the festival is held) includes 170 picnic tables, volleyball courts and ample parking.

Doheny State Beach, a 62-acre state park in scenic Dana Point Harbor, features one mile of whitewashed sandy beach. The City of Dana Point is named after Richard Henry Dana Jr. (1815-1882), a Harvard-trained lawyer, seaman, and author of the notable sea journal, “Two Years Before the Mast” (1840). In his journal, Dana documents his voyage from Boston to California on the merchant ship, Pilgrim, describing the area once known as Capistrano Bay as “the most romantic spot on the California coast.”