Verve Records announces the release of a never-before-heard stellar live recording from the First Lady of Song, Ella Fitzgerald.
The Lost Berlin Tapes were recorded – incredibly in both mono and stereo – at Berlin's Sportpalast on March 25, 1962 and finds Ella at the top of her game with a trio led by pianist Paul Smith, Wilfred Middlebrooks on bass, and Stan Levey on drums.
There was just something about Berlin that brought out the best in Ella. In February of 1960, she gave a concert at the Deutschlandhalle, which became one of her best-known and best-selling records, Mack The Knife: Ella in Berlin. The album won her 2 Grammys, it went on to be inducted into the Grammy Hall of Fame.

Recorded in 1962 at Sportpalast Arena in Berlin, the never-before-heard set features the First Lady of Song in her prime-and now, it will be available for all to hear on Oct. 2 via Verve Records. 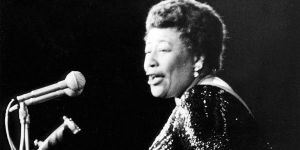