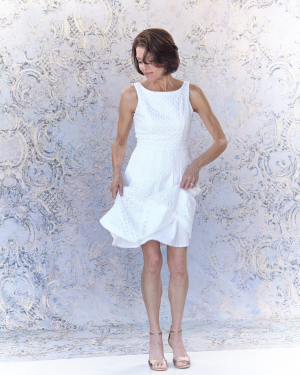 Anne Walsh, who originally hails from the Boston area, has been an LA resident since moving here to pursue her masters degree at Cal State Long Beach and establish herself as a solo artist.

A sultry night in Rio, a sunny day in Brazil. Contemporary jazz vocalist Anne Walsh delights audiences with her Brazilian groove, and airy smooth vocals.  Her recordings, including Grammy nominated “Pretty World” bring new interpretations of classics from Sergio Mendes to Pat Metheney and Cole Porter.  Urban Network writer Scott Galloway calls Pretty World “The most impressive approach to balancing [newer] compositions with standards as has been rendered in many a velvet moon”, and, “..the most refreshing contemporary jazz vocal album of the year.” She has performed at diverse venues throughout California, Boston, and New York and internationally in Brazil and Romania to name a few. For her most recent release Brand New Anne composed lyrics for several originally instrumental selections, and co-wrote selections with husband Tom Zink.  Anne loves her life in music as a singer/performer, as a teacher, and as a lyricist. She is thrilled to be performing once again at Vibrato.

Fridays @ Vibrato is the centerpiece of the Vibrato supper club experience. We present a carefully curated evening in which customers enjoy five-star American cuisine alongside classic jazz. We handpick the finest instrumentalists and vocalists to create a celebration of a era when Sunset Strip rooms like the Ciro’s, The Mocambo, and Café Trocadero were the epitome of hip Hollywood elegance and nightlife.