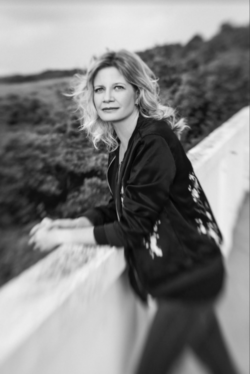 Brenda Hopkins Miranda is one of the most exciting pianists in Puerto Rico and the Caribbean today. She is a mesmerizing performer, capable of generating real fire with her percussive piano style. Having grown up with the magical blend of Puerto Rican rhythms and melodies, she expanded her sound into a superb mix of Funk, Jazz, Soul, Blues, R&B, Bluegrass, European romanticism, Spanish passion and Third World heat.

As a bandleader Hopkins Miranda has released six recordings: “Boricua on Board” (1998), “Bohemia” (1999), “Recuerdos de Granada” (2009), “Simple” (2012), “Aeropiano” (2014) and “Puentes” (2017) and has performed in Puerto Rico, the Caribbean, Central and South America, the United States and Europe. She is also a recognized composer and artist on several movies, short films and documentaries.