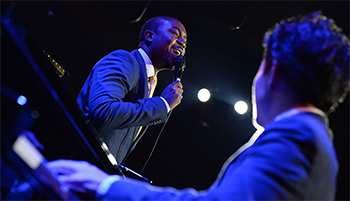 Charles Turner III & Uptown Swing. Tuesday-Saturday evenings, doors open at 11:15pm for Late Night Sessions featuring some of the most talented emerging artists in jazz. There are no reservations for Late Night Sessions - just swing by! This month, Thursday and Saturday evenings will be hosted by Julian Lee. The Charles Turner Quartet has performed at Dizzy's Club Coca Cola at Jazz at Lincoln Center for the Generations in Jazz festival  for 2 consecutive years. He also Released his Debut Album " Dreamers" Produced by Grammy Award winning Drummer Ulysses Owens  at Jazz at Lincoln Center March 2014. Appearing next  at Jazz at Lincoln Center, he will be a part of the 2015-16 Season at is Debut concert in the Appel Room in May 2016. Turner graduated from the prestigious Berklee College of Music in Boston, Ma on a full scholarship. During his time there Charles had the wonderful opportunity to study and perform with Grammy Award–winning drummer and educator Terri Lyne Carrington, Dave Samuels, Dee Dee Bridgewater, and Joanne Brackeen.