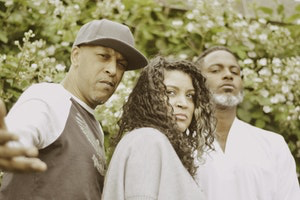 In New York City, a Former Seattle resident Butterfly (a k a Ishmael Butler) hooked up with Philadelphia native Doodlebug (Craig Irving), who was a member of NY dread Poets Society, and Ladybug aka Mecca (Mary Ann Vieira) a Maryland denizen of Brazilian descent. They were backed by Silkworm, who later embarked on a solo career under the name King Britt