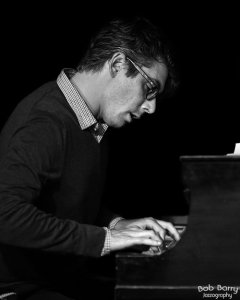 “Josh is that rare young musician who has not only a wealth of study and experience under his belt (all but assuring him a prominent place in jazz music), but he also possesses those rarest of musical attributes: a touch, a tone, and a “sound” that are all identifiably his own.” — Peter Erskine, legendary drummer

His debut album as a leader,  2004’s Anticipation, garnered attention while his 2007 followup, Let it Go, was hailed by Jazz Times, All About Jazz and Jazz Review as a fully-realized breakthrough album. Nelson’s next album, 2009’s I Hear a Rhapsody, had him re-imagining Jerry Goldsmith’s “Theme From Chinatown,” Jimmy Van Heusen’s “Here’s That Rainy Day” and Elliott Smith’s “Everything Means Nothing To Me” while contributing seven affecting originals. With 2011’s sci-fi influenced Discoveries, Nelson introduced his Discovery Project, an immersive multi-media presentation combining video, performance art, light and art installations with his original music. He followed with another ambitious Discovery Project in 2015’s Exploring Mars, which wedded evocative musical themes to spectacular NASA/JPL video footage of the Red Planet.