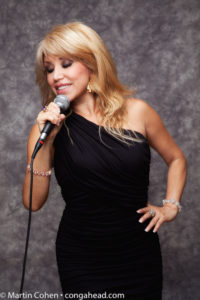 Lula Valdivia, singer, actress, recording star and television personality, moved to the United States from her native Peru only a few years ago, but her music has been internationally recognized throughout the world for decades.  Most recently she has released a CD of bachatas, co-hosted a TV show, judged a vocal competition, appeared in commercials and been awarded special recognition for her accomplishments as an ambassadress of Peruvian culture in the U.S. She is quite an accomplished lady!