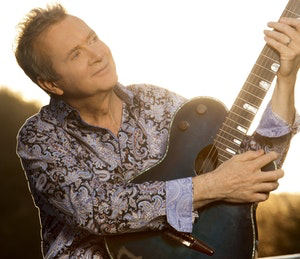 Like so many millions of us, guitarist Peter White still feels closest to the music he absorbed while growing up. As a British teen in the ’60s, he kept his ears glued to the radio—soaking up the exciting new sounds of rock bands like the Beatles and soul giants like Stevie Wonder—and tried to learn how to play those songs on the acoustic guitar his dad had given him. It didn’t take him long to get the hang of it, and now, after more than four decades as both a leader and sideman, he’s returning to those tunes that impacted him so forcefully in his youth.

“I was listening to the radio,” he recalls, “and they played a song I’d recorded with Al Stewart, ‘Ghostly Horses of the Plain,’ which was pretty much a guitar instrumental. The DJ comes on and says, ‘That was Al Stewart.’ I said, ‘No, that was me!’”

From that point on, White began concentrating on his own music, composing and recording under his own name. His 1996 Caravan of Dreams album sold over 300,000 copies and by the early 2000s his shelf was bulging with awards for his virtuosic musicianship. “I never thought I’d be in the position of having a career playing my instrumental music,” White says. “When I started out, that wasn’t a road that was open to me. Then it worked.”

It’s still working. “I throw my net far and wide,” he says, “and don’t label it. It’s just instrumental music. I like to play nice songs on the guitar and I hope people like it.” Based on his stellar four-decade track record, and the instantly contagious grooves he’s created on Groovin’, that’s not going to be a problem.