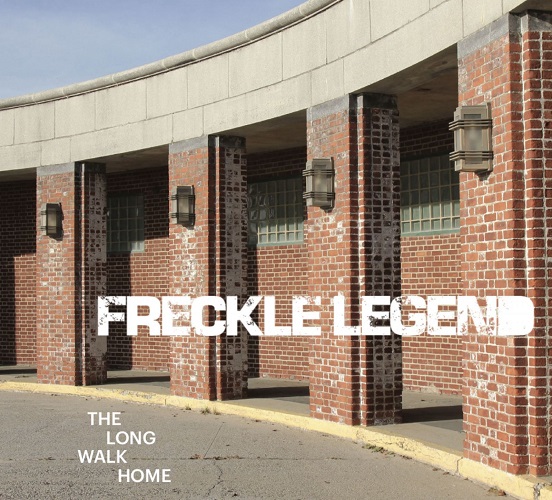 "The Long Walk Home” runs the gamut from avant-garde jazz to hard-core rock, with driving guitar riffs and soulful vocals

Funky NYC-based band Freckle Legend's freshman recording, The Long Walk Home, delivers a playfully self-aware musical journey, jam-packed with a hefty dose of kick-ass. Every song on the album was written on one day and then recorded on the next, creating a sound that is deliberate and genuine, never over-thought, and always fun.

Says RJ, "I've been working with Benjamin since '91, and I built this band around his frenetic and aggressive sax playing — his raucous, wailing squeaks and honks were exactly where I wanted this album to go. Adam, Rozhan, Cale, and I met while recording with Douglas and the Goodharts [a popular NYC soul band]. There was a moment when I looked around that studio and thought: 'I want to play with these guys forever.' We added Teddy a little later and it all just fell into place naturally."

The album begins with the track "Forensic Pathology," inspired by the avant-garde music scene of downtown New York in the 1980s: dark and mysterious, yet simultaneously fun-loving and joyful. "In the video for this song we danced the entire time," says RJ.

The second tune is an instrumental guitar duo that recalls the feeling of sipping a cold beer on a hot rooftop. "We spent an entire rehearsal day attempting to cover an Olivia Newton-John song. But we just couldn't find the sound and piece things together coherently. Instead, the next day we wrote and recorded something completely different, relaxing into a place that was more 'us.' Teddy suggested we call it 'If at First' and that name stuck," recalls RJ.

The third track, "All of This," was originally called "Jouska," a made-up word from the Dictionary of Obscure Sorrows that embodies the conversations, connections, and chaos of the muddy waters in your own head. Cale sings, "All of this is crazy. None of this can harm me. It's all in my mind — don't resist, don't fight it, don't try in vain."

The album takes a strong turn with "Debris," an aggressive, balls-out fever dream in which one might never expect saxophone to sit comfortably with — let alone soar above — churning, heavy metal guitar riffs.

As if gradually dissolving into early morning, "This Is the Time," celebrates dawn in New York — where for a moment, time stands still, and the city feels like it's all your own. "I wanted to see if I could sound like a drum machine. I did a ton of overdubs with shakers, tambourines, metal pie plates, and finger snaps. It just seemed to fit the tune and worked nicely against the organic sound of the grand piano," RJ says.

At the halfway point of the album, "Sunflower Sutra" is a guitar and bass duo — almost a prayer — featuring Teddy and Rozhan. It gives a nod to the Allen Ginsberg poem of the same name. In it, the two instruments weave dissonant and hollow harmonies that resolve themselves peacefully in the final notes.

To write "Fragments," each band member brought in an old photo that evoked a dream-like memory of their childhood. Sweet, haunting vocals interspersed with synthesizer sounds paint a poignant picture of childhood toys. "It's wild that you can have a memory that is so vivid, strong, and loaded with information but really, it's just the smallest fragment in time," RJ says.

The "Long Walk Home," the album's title track, is a reference to Joseph Campbell's concept of the "hero's journey": the age-old story of a hero's call to action, transformative challenge, and triumphant return. Musically, the middle section of the song starts small but finishes big, building slowly and emerging at the end just like Campbell's hero: stronger, more confident, self-assured, representing gradual growth by overcoming adversity.

Intended to conjure a film noir vibe, but with the band's characteristic sense of humor, "Clues" is another guitar duo featuring Teddy and Adam. It imagines the classic, chain-smoking, fedora-wearing detective, chasing clues while solving a crime. Jagged melodic lines punctuated by slightly off-kilter guitar riffs create an air of playful mystery.

"You and Me" and "Friday" close out the album as Joseph Campbell's hero returns home from his long journey of self-discovery. When the last note of the album fades to silence, that journey is over. The hero has gone where he needed to go, and returned stronger and wiser.

So, walk down the mean streets of New York City and enter Freckle Legend's world. Take a swing in the psychological batting cage of jouska, admire Ginsberg's sunflowers, and feel the fragments of a memory you can't quite grasp. When you are filled up and wrung out by the ubiquitous, lonely, and yet overwhelmingly joyful nature of the human experience, you know you traveled Freckle Legend's The Long Walk Home.