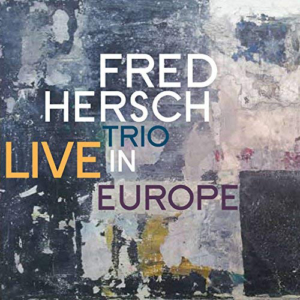 One of the giants of the jazz piano of the past 35 years, Fred Hersch has recorded prolifically as a leader since the mid-1980s but has yet to make an unworthy or uninspired recording. His playing at times hints at Bill Evans (mostly in the close interplay with his sidemen) and Thelonious Monk (one of his favorites) but he has had his own original voice for decades. Able to range from melodic versions of standards to free form playing, most of Hersch's improvising falls somewhere in between, creating his own world of music.

Live In Europe, which teams Hersch with his longtime trio (bassist John Hebert and drummer Eric McPherson), was recorded in Brussels although at the time the pianist did not realize that the concert was being documented. The well-rounded program features Hersch at his most creative with stimulating support and commentary from Hebert and McPherson.

The opener, Thelonious Monk's "We See," features a stretched-out version of the melody, some solid swinging, and Hersch really getting into the essence of Monk's style while still showing his own individuality. The next six selections are all his originals, ranging from the thoughtful yet explorative "Snape Maltings" and the colorfully unpredictable "Scuttlers" to "Skipping" (a cooking but abstract relative of "All The Things You Are") and "Newklypso" (a lively calypso written in tribute to Sonny Rollins). Also included are reworkings of a pair of Wayne Shorter songs and a mostly disguised version of "Blue Monk."

There is a great deal of creative music heard throughout this concert, but that is always true of Fred Hersch's recordings and performances. Live In Europe, which is available from www.palmetto-records.com, is highly recommended.