From The Man Behind The Music For The Hit Film Soul…Jon Batiste Unites Soul, Pop, Blues In Joyful New Single “I Need You” Out Today

Multi Grammy & Emmy nominated recording artist, TV star and activist Jon Batiste announces a new single "I Need You" from his forthcoming 'black pop' album WE ARE. The album is set for worldwide release on March 19 (Verve Records). The new single is available now, along with a new music video directed by Alan Ferguson (Camilla Cabello, Jay-Z) and choreographed by the Emmy nominated Jemel McWillams (John Legend, Janelle Monáe). The video stars Batiste as the lead man and lead dancer, fronting a high-octane ensemble of dancers. 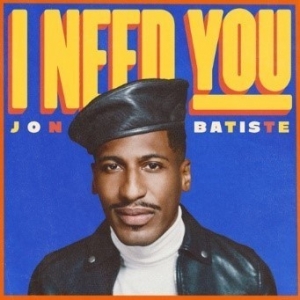 On "I Need You" Batiste showcases his vocal range, accompanied by his once-in-a-generation musicianship. Produced and written in collaboration with songwriter Autumn Rowe and producer Kizzo, the song is communal and deceptively sophisticated. It fuses the sound of early 20th century black social music, with modern pop production and a hint of hip-hop storytelling. He expertly alternates between belting high notes in full voice, to singing harmony with himself on the choruses, to delivering the verses in a 'farm rap' style. Batiste then dives into two killer instrumental breaks on both piano and saxophone - all in less than 3 minutes.

The video stars Jon as both a charming leading man and a bandleader with a sly nod to Little Richard and James Brown. It pays homage to Harlem era swing dances of the 1920s, 30s and 40s, with hints of New Wave film. Featuring swing and Lindy Hop choreography from Emmy-nominated choreographer Jemel McWilliams and directed by Alan Ferguson, the video brims with healing energy and unbridled joy. The video made its broadcast premiere today on MTV Live, BET Soul, and mtvU.

"I Need You" is the second single from Jon's highly anticipated album WE ARE. The first was the titular track, released as an accompanying anthem to Batiste's nationally recognized musical protests in New York City last summer.

WE ARE represents a completely new sonic chapter for Jon Batiste. Inviting some of the most esteemed creative minds to assist in birthing the album, he reached the finish line smack in the middle of the first wave of the worldwide pandemic and volatile social unrest. The result is a body of work characterized by the consciousness of Marvin Gaye, the grounded optimism of Stevie Wonder, the iconoclasm of Thelonious Monk and the swagger of Mannie Fresh.

Alongside songwriter Autumn Rowe and producer Kizzo, Batiste wrote and planned much of the project in about a week from his dressing room at The Late Show with Stephen Colbert, where he's the musical director and bandleader. WE ARE was recorded in New York, Los Angeles and in his native New Orleans, melding inspiration from his new home and new collaborators with that of the Batiste musical dynasty. The album was also recorded in between sessions for Disney/Pixar's 2020 hit film Soul­, which saw Batiste's music — and hands — incorporated into the animation about a teacher who dreams of being a jazz pianist.

Batiste presents a captivating musical experience to the world rooted in catharsis, joy, freedom, contemplation and sensuality. It's a love letter to his southern roots and the heritage of Black Music with guest appearances by Mavis Staples, Quincy Jones, Zadie Smith, PJ Morton, Trombone Shorty, St Augustine Marching 100, his father Michael Batiste, grandfather David Gauthier and many more. It is a meditation steeped in the sounds of the times with collaborators including POMO (Anderson.Paak), Ricky Reed (Lizzo), Jahaan Sweet (Drake, Eminem) and others.

"I'm publicly known for some things already," says Batiste. "But there's so much more to know about me. It's always been there. Now is the time to show the world my full artistry."

Batiste continues, "WE ARE is a message of love for humanity, of humble reverence for our past, and of a hopeful future, in which we are the ones who can save us. The art reveals its motive to you. You just have to wait for the Spirit to tell you what it wants."

One of the best-known musicians of his generation, virtuoso pianist, singer, bandleader, educator and television personality Jon Batiste has spent his career bringing that music back to where it started — that is, with the people. From his days at Juilliard, where he established his Stay Human band by playing around New York City's subways and in street performances he called "love riots," to his work since 2015 as the bandleader and musical director of The Late Show With Stephen Colbert, the Kenner, Louisiana native has consistently channeled his superb technical skill and deep knowledge of jazz tradition towards a specific, intentional purpose: making people's lives better and brighter, one harmonaboard (that's harmonica and keyboard, combined) solo at a time.

Born into Louisiana's legendarily musical Batiste family, Jon has performed and recorded widely since his teens; his 2013 album, Social Music, spent weeks atop the Billboard and iTunes jazz charts. Batiste tapped T Bone Burnett to produce his Verve debut, Hollywood Africans, which received wide acclaim when it was released in 2018 — the Wall Street Journal called it "an elegant meditation." His version of "St. James Infirmary Blues" also earned him his first Grammy nomination in 2019, in the Best American Roots Performance category.

His flexibility as an artist, his fluency in jazz as well as popular music of all stripes, has allowed him to collaborate with legends from Wynton Marsalis, a mentor since his Juilliard days, to Prince — as well as many of the widely-varied artists who appear on the Late Show. Batiste's marquee performances have ranged from the Grammy's, to the Kennedy Center Honors, to the US Open and the NBA All-Star Game — in 2015, Batiste and the Stay Human Band became the first group to play the main stage at both the Newport Jazz and Folk festivals.

Batiste played himself on the HBO series Treme and appeared in director Spike Lee's Red Hook Summer — most recently, his music was featured in the 2020 Disney/Pixar film Soul. He's been awarded the American Jazz Museum Lifetime Achievement Award, the Harry Chapin ASCAP Humanitarian Award and appeared on Forbes' 30 Under 30 list; Batiste also currently serves as the Music Director of The Atlantic and the Co-Artistic Director of the National Jazz Museum in Harlem.

Jon Batiste is devoted to the education and mentorship of young musicians. He has led his own Social Music Residency and Mentoring Program sponsored by Chase, as well as master classes throughout the world. He has also led several cultural exchanges, beginning in 2006, while still a teen, with the Netherlands Trust, which brought students from the USA and Holland to perform with him at the Royal Concertgebouw and Carnegie Hall.

Batiste balances a demanding performance schedule with public speaking engagements, masterclasses, brand partnerships, community activism and acting roles. His composing and songwriting will be featured in his large-scale, genre-melding symphonic work "American Symphony," set to premiere at Carnegie Hall in 2021 and he has been developing a Broadway musical about the life of famed painter Jean-Michel Basquiat.