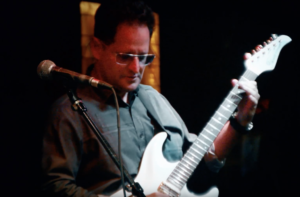 In 2015, Gideon King & City Blog(GKCB) released a full length CD, City Blog. The music was met with wide critical acclaim, with the Huffington Post calling King a "musical genius." Having worked for years in establishing a reputation as a rising force in the New York Jazz scene, King has worked with John Scofield and members of Steely Dan and many other musical giants.

“Gun To My Head” is his latest Single Release from the CD “Upscale Madhouse.”

We would like to welcome Gideon King to JazzMonthly.com.

Jazz Monthly: Everyone trying to describe your sound says something different. What is the Gideon King sound? Where were your roots?

Gideon King: The Gideon King & City Blog sound is a mélange (did I really just use that word?) of rock and jazz and pop. Its fusion I guess. I would call it urban progressive singer/songwriter angular pop funk fusion.  I hope that clears everything up perfectly.  That name will be good for marketing and building a brand…. nice and simple…. like Coke Or Pepsi. My true roots are fusion and folk. Steely Dan, Wayne Shorter, John Scofield, and Pat Metheny, meet Neil Young and Bob Dylan in a dark ally and reach a global settlement. My roots are the global settlement.

JM:  You have been a successful finance person on Wall Street and now a critically acclaimed writer/performer/musician. This takes extreme discipline and time to be top at both. What’s your secret?

GK: Every morning I eat Kee Wee fruit. It has special properties that change the DNA. I have lots of energy and a supportive family, supportive of my mental illness that is. Also I avoid Netflix for the most part.

JM:  Your music definitely does not reflect the normal scale structures of a standard song. Yet, there is a smooth flow through your chord progressions and melody. Is this something that is thought out and structured over time, or is it purely improvisational… progressing off of a beginning theme?

GK: I am a big fan of through-composition, starting in one place and ending in another. Typical ABA structures are boring although soothing in that they provide a sense of order. I hate the way most popular music is structured. You know exactly what will come next. I do put a lot of thought into the chord changes. I like to move through seemingly unrelated chord changes but which share common tones.  I don’t like traditional 2/5/1 structures. They make me strangely nervous.  There is certainly improvisation in my tunes, but the improvisation is inside preset structures; the improvisation is the freedom to do what is right. I really like to play with good musicians who are better than I am, so I try and write interesting chord changes for their amusement.

JM:  Being a very advanced player with superior writing abilities, and able to write for any age group or genre… how do you come up with new ideas? What keeps the creative juices flowing?

GK: During the day I listen to what is being said and watch what is being done by others. Insanity and irony is everywhere. Personalities are mostly artifices so it is all really funny and dissonant.  I scrape off bits and pieces of everyone’s predicament, including my own, and hang them together in a song. Travelling is good for new ideas and human interaction, as painful as it might be, is perfect for ideation. 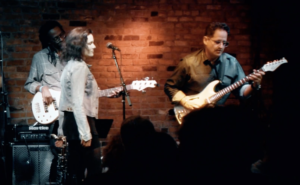 JM:  The members in your band really compliment your sound and performance. How did you connect with everyone and get to put this unique and outstanding group together?

GK: Well I more or less had tryouts of many people who came word of mouth. I need singers who can handle tricky harmonies and who can sing lead. I need drummers and keys people and bass players that are jazz trained so they can handle more complex harmonic material. I need people more technically sound than I am. That is what I was looking for. I was also looking for nice people who are fun to be around and who are looking to laugh and not be offended. That’s our group. We are pre-amused not pre-indignant.

JM:  Your recordings have a very “Live” sound. Do you have a standard recording session procedure? Were the song rehearsals a collaboration of sort or more of a definitive arrangement and direction?

GK: Well for recording tracks it is all pretty laid out and then within the structure folks can improvise quite a bit. You don’t tell a player like John Scofield or James Genus what to play. That is like telling Floyd Mayweather when to throw a left hook. The recordings are heavily edited and attention to detail reaches neurotic levels. It is an arduous and painful process but really rewarding in the end. Rehearsals for live shows are a bit different. We come to rehearsal with the song structures charted out and then its like a suggestion box vibe where we all work it out till something good happens. Very good musicians who act professionally in a room for three hours will get shit done. That’s what happens.

JM:  Do you prefer the solitude and creative energy in the recording room or the activity of the live club performance?

GK: Man there is nothing like a live performance when things go well. It’s a collective energy that can’t be duplicated. On the other hand I do get nervous playing live sometimes and when the sonic blend sucks it sends me into a morose state for many hours afterwards. The beauty of the studio is that you can strive for a sort of sonic perfection that can’t be constructed in a live setting.  The studio is like a weird lab experiment where you try and come up with the perfect compound. It is a beautiful nexus between technology and playing. Almost anything is possible inside the walls of a well equipped studio so it is up to good taste to put the breaks on. 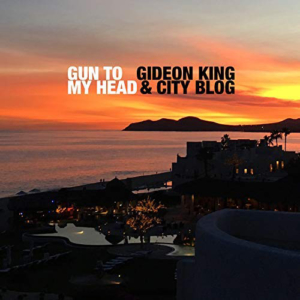 JM:  “Gun To My Head” your Single Release from the CD “Upscale Madhouse” opens with an intimate acoustic guitar and then awakens into a cool pop-jazz rhythmic sound. Great transitions! Give us a little behind-the-scenes about “Gun To My Head.”

GK: That song is about the difference between L.A. and Gotham City. I like L.A. but I feel empty after spending any time there. I love New York but it is a sickening joint. The tune is about music in both settings, the different inspirations that each place engenders. The opening is me playing a pre-classical tune called Espanoletta written by Gaspar Sanz. Later it is John Scofield playing a solo which was very cool, which I couldn’t play if my damn life depended upon it. Marc Broussard is the vocalist. That guy is so good it’s a joke. He has a natural and soulful voice which I can listen to all day. The tune was created in multiple sessions. Mostly rhythm section first playing to a backing track of my guitar. Then Broussard came in for vocals. He killed it. Then it became clear that my guitar solo was just not getting it done. So I called in John Scofield who came in and crushed it in a few takes. That was satisfyingly humiliating. The horn section ideas came from Donny Mccaslin, who is a monstrous musician. He is one of those guys that you can’t challenge enough. No way to feed his beast.

JM:  Is anything else happening out there today that also interests you in music?

GK: Sure. I am always trying to find new artists to admire. Recently I have been listening to the country artist Kacey Musgraves. She could teach a class in how to write a perfect song. I am trying to learn to relate to the fact that music is becoming post-instrumental, that guitars and pianos and drums might someday be things of the past. I go to clubs to hear new stuff and I try and relate. Its hard. I am old.

JM:  It seems that you are having a very complete career compared to the average person. Business… financing… writer… performer. Where is Gideon King five years from now?

GK: Dead likely. But before I take the big nap I want to say thank you for interviewing me and showing interest in the music. I appreciate it.