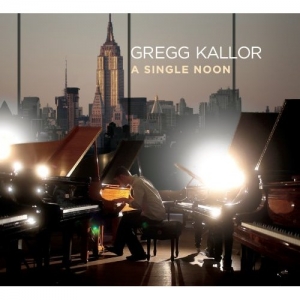 Tremendously gifted pianist and composer Gregg Kallor describes his latest CD,”A Single Noon” as “a love letter to this incredible city.”  Now, exactly which city is he speaking of?”-- you ask. Of course he is speaking of the city which has become his beloved home for almost a decade and a half—New York!

Actually Kallor was born in Cleveland and grew up in West Hartford, CT. Ten years of classical training later, Gregg became captivated by improvised music. He began to study with the brilliant pianist Fred Hersch, with whom Gregg continues to study, and with whom he co-produced this latest project--- “A Single Noon.” Having gained a well deserved astonishing reputation, many music awards, and a degree from Tufts University; Kallor moved to the “City of Golden Dreams” to pursue a career in Jazz.  It’s been his home ever since, hence his sincere, glorious salute to New York City.

“A Single Noon” is not just an album of New York City-ish themed tunes. That has been done more times than we can remember, right? This project, however on his own “Single Noon Records” label, is far more ambitious. This is a nine movement vivid representation of NYC life the way Kallor sees it, feels it, tastes it, and practically breathes it! Mr. Kallor is a splendidly creative, musical “tour guide”-- moving us along and through “his” city. You immediately get a sense that he wants us to experience ALL of what he is feeling. Combining composed music and improvisation, the artist’s palette has plenty to share with us--- and share with us he does! Only a composer and performer of Gregg’s perceptiveness and sensitivity could have offered us this type of an album. There is so much heart here. There is no holding back here. He gives us his musical ALL!

It begins fittingly with the title track- “A Single Noon.”  Inspired by an Emily Dickinson poem, Kallor perfectly sets the tone for this evocative mental and emotional tribute to his beloved Gotham. Listening to this first movement makes us want to continue on, and keep going with Gregg and see what else he has for us. The second movement is titled “Broken Sentences.”  There is a deliberate uneven, yet pleasing UNCHOPPY “CHOPPINESS” to this piece! Don’t try to follow it through musical bar lines; just go with it! Kallor’s improvisation section here is a superb composition in and of itself.

In the movement simply called “Night,” Gregg waveringly shows us all sorts of life in his city from intense… to tranquil. At one serene point, you can almost “see” the flickering lights, and even “see” each individual apartment lamp going out…one-by-one… gradually-- making Kallor’s placid city grow darker and darker. All of this imagery came out of the piano of Gregg Kallor.

On… and on… and on, our skillful “tour guide” takes us through New York with his other movements. Next is “Straphanger’s Lurch.”  Look closely at that title. It reads STRAP-HANGER’S LURCH. It describes that awkward swaying or tip that our composer gets, all because he refuses to hold onto the safety handholds!  “Found” which Kallor calls the “Central Park of the suite!” has an easiness to it with gorgeous chord changes and voicings. The frenetic pace, tension, and downright ultra potent coffee “nervousness” perfectly describes the up and down mood swings of Kallor’s New York in “Espresso Nirvana!!!”
Gregg’s beautiful touch, thoughtful navigation, and improvisational skills in the seventh movement “Giants” are employed to show the awestruck feeling of all of the musical “Giants” he has been privileged to know--- his musical skyscrapers!  “Things To Come” pushes us all along like the ghosts in Dickens’ “A Christmas Carol”—knowing that there are more things for us to experience, and more lessons to be learned from Gregg in Kallor’s New York City. This excellent CD could only conclude with Gregg’s hauntingly emotional final movement—the coda to his suite…“Here Now.”  All the way through this CD, Gregg Kallor never just bombards us with his unbelievable piano chops, though we all know that he easily could have-- if he wanted to! There are no over the top gratuitous piano garnishes or keyboard swirling flurries here just to demonstrate that Kallor can really play. We already KNOW that he can really play! Instead he used his painterly technique with such keen taste, sensitivity, and thoughtfulness--- all the way through.

After listening to Gregg Kallor’s wonderful tribute “A Single Noon,” I feel as if Mayor Bloomberg should give Gregg the “Key to the City!!! Yes, I’m joking, but only half joking! I know that the wondrous Fred Hersch is proud of his remarkable student, and of this project of which he is the co-producer. You get the feeling that Gregg wants his listeners to be in love with New York City as much as he is. I’m not so sure that that could ever be possible!!!