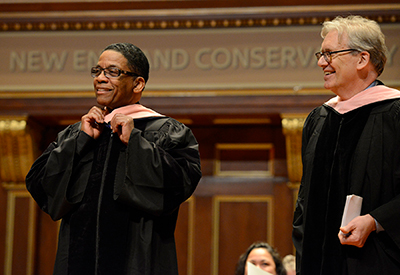 Legendary jazz composer/performer and 14-time Grammy award-winner Herbie Hancock was at New England Conservatory on Sunday, May 20, 2018 to receive an honorary doctorate as part of the 147th Commencement ceremony in NEC's Jordan Hall.

Approximately 265 students graduated from NEC's degree, diploma, and certificate programs with Bachelor of Music, Master of Music, and Doctor of Musical Arts degrees, as well as Graduate Diploma and Artist Diploma.  Esteemed faculty-member John Heiss, who is celebrating his 50th year of teaching, was the keynote speaker at the 2018 Commencement. 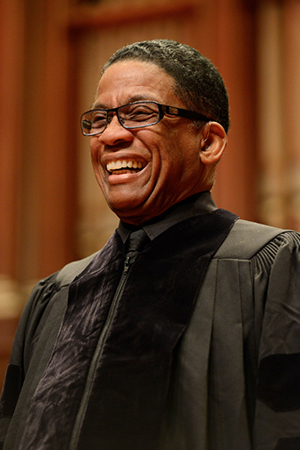 Herbie Hancock, a 14-time Grammy award-winner and legendary jazz composer and performer. Born in Chicago, Hancock was a piano prodigy, performing with the Chicago Symphony at age 11. His career began after being discovered by Donald Byrd and, shortly thereafter, he joined the Miles Davis Quintet; he later made appearances on Davis' groundbreaking In A Silent Way and Bitches Brew, which heralded the birth of jazz-fusion.

After leaving Davis, Hancock put together a new band called The Headhunters and, in 1973, recorded Head Hunters, which became the first jazz album to go platinum. The winner of multiple Grammy Awards, he also won an Academy Award for his film score 'Round Midnight. His 2007 tribute album River: The Joni Letters won the 2008 Grammy Award for Album of the Year, only the second jazz album ever to win the award, after Getz/Gilberto in 1965.

Recently named by the Los Angeles Philharmonic as Creative Chair For Jazz, he also serves as Institute Chairman of the Thelonious Monk Institute of Jazz.

Joseph L. Bower, NEC Lifetime Trustee and leader in general management at Harvard Business School (HBS). Bower joined the Board of Trustees in 1986, serving as Vice Chair from 1992 to 2003. He became a member of the Board of Overseers in 2004 and has been a devoted NEC Life Trustee for over 13 years. A leader in general management at HBS for 54 years, he is an expert on corporate strategy, organization, and leadership. Bower served as Senior Associate Dean at HBS, was on faculty of Harvard's Kennedy School of Government, and founded the General Manager Program in 1995.

Edgar Albert Meyer, Jr., MacArthur Award and Avery Fisher Prize winning bassist, multi-instrumentalist and composer. Hailed by The New Yorker as "The most remarkable virtuoso in the relatively un-chronicled history of his instrument," his uniqueness in the field has been recognized by numerous awards, including a 2002 MacArthur Award, and he is the first bassist to receive the Avery Fisher Career Grant (1994) and the Avery Fisher Prize (2000). Meyer performs and composes frequently for music festivals around the world, including Santa Fe, Aspen, Tanglewood, Caramoor, Chamber Music Northwest, and Marlboro. He is an artist member of the Chamber Music Society of Lincoln Center, a visiting professor of Double Bass at the Curtis Institute of Music.

Peter Lyman Row, a member of NEC's faculty since 1973, who is receiving this award posthumously. Row studied sitar and rudra vina in India, earning the Bachelor of Music, Master of Music, and Doctor of Music degrees from the Prayag Sangit Samiti. He performed as a solo recitalist throughout North America and India, making numerous concert, radio, and television appearances. A former president of the Northeast Chapter of the Society for Ethnomusicology, Row is widely published, and he lectured about Indian music across the U.S. and abroad. He was also a research associate at the Harvard Graduate School of Education and served as a consultant on Asian music for the Smithsonian Institute. Row served as Dean of New England Conservatory from 1983 to 1990 and Provost from 1990 to 1996 and from 2000 to 2004.

Celebrating its 150th anniversary, New England Conservatory (NEC) is recognized internationally as a leader among music schools, educating and training musicians of all ages from around the world. With music students representing more than 40 countries, NEC cultivates a diverse, dynamic community for students, providing them with performance opportunities and high-caliber training by 225 internationally-esteemed artist-teachers and scholars. NEC pushes the boundaries of making and teaching music through college-level musical training in classical, jazz and Contemporary Improvisation. It offers unique interdisciplinary programs such as Entrepreneurial Musicianship and Community Performances & Partnerships that empower students to create their own musical opportunities. As part of NEC's mission to make lifelong music education available to everyone, the Preparatory School and School of Continuing Education delivers training and performance opportunities for children, pre-college students and adults.