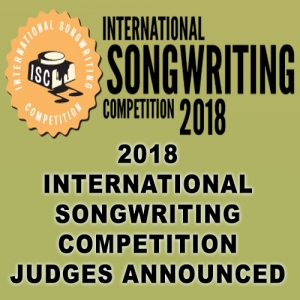 June 18 , 2018  The International Songwriting Competition (ISC) is pleased to announce its panel of judges for the 2018 competition. Established in 2002, ISC is the world's largest songwriting competition and is open to both professional and amateur songwriters, signed and unsigned. A total of 71 winners in 23 categories share in over $150,000 in cash and prizes, including an overall Grand Prize consisting of $25,000 (US) cash, and much more.

Over the years, ISC has helped to propel many artists to achieve greater success, including getting record and publishing deals, licensing agreements, gigs, and much more. Past winners have included: Illenium; Vance Joy; Bastille; Gotye; Lindsey Stirling; Kimbra; The Band Perry; Kehlani; Passenger; Gin Wigmore; Missy Higgins; and many more.

There are a lot of songwriting competitions in the world, but only ISC has judges of such prestige and influence, said Candace Avery, Founder and Director of ISC. Although many of our judges participate year after year, we have a lot of new judges this year, bringing fresh ears to the process. We are grateful for the perspectives and opinions they bring to the process of selecting the winners.

Entering ISC can be done online or through the mail, and information can be found at
https://www.songwritingcompetition.com.