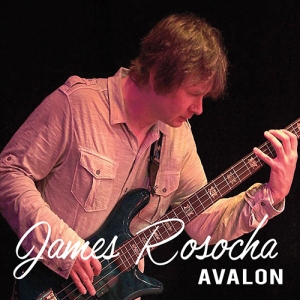 After over twenty years and nine albums as a sideman with fusion jazz guitarist BD Lenz, James steps out to release his first solo debut album "Avalon"

James Rosocha's "Avalon" features a variety of heavy hitting original compositions in the styles of funk, latin, and jazz. The album features nine tunes; eight of which feature James' original tunes, his versatility as a bassist and composer, and his fluent soloing abilities.

Track one "Dysfunction Junction" is a funk journey through the stratosphere with tight, salient bass and drum grooves by both James and drummer Josh Orlando. The bass matches the keyboard's melody of the tune and takes on charming melodies of its own. This tune features James' harmonic and melodic approach to soloing as he sings along with horn-like phrasing. Guitarist Audric Jankauskas contributes his sophisticated, refined soloing abilities to this tune with class and precision.

Track four "By the Wayside" is a jazz waltz with tender melodies doubled by both the bass, and soprano saxophonist Geoff Mattoon. It contains melodic highlights and improvisational ventures by both James, Geoff Mattoon, and pianist Steve Kramer.