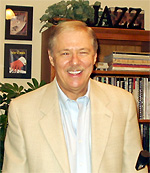 Dr. George Lowris grew up in New York City. He earned a Bachelor of Music Degree at the prestigious Manhattan School Of Music where he studied classical piano with Alice Kortschak and Ernest Ulmer. He also studied with James Stafford and subsequently, Howard Aibel. Then, at the same institution, Dr. Lowris earned a Master of Music degree in Music Education. This interest in Music Education led him to Columbia University, where, mentoring under the internationally-known Dr. Robert Pace, he attained of a Doctor of Education degree, in music and music education.

As a teenager, Dr. Lowris became interested in the relationship between jazz and classical music, particularly in the improvisational aspects of both genres. As a result, he has made the study of jazz improvisation a lifelong passion. While at Columbia, he studied jazz improvisation with Dr. Bert Konowitz, This spurred him to write, as his dissertation, The Teaching of Jazz in Junior High School General Music Classes Through Keyboard and Listening Experiences: A Source Book for Teachers.

Dr. Lowris has also studied non-traditional methods of music education such as those of Kodaly, Orff and Dalcroze. He has attended workshops in these approaches at Eastman School of Music, Boston University and Montclair State University and received certification in all three Orff Schulwerk levels from the Ridgewood/Orff summer program.