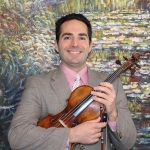 I’ve had a passion for music for as long as I can remember. At a very early age, my mother, Pasqualina Howard, began my musical training by teaching me piano, voice, violin, music theory and history as well as other aspects of music. Listening to music and attending concerts was an important part of my musical growth. I fell in love with the violin before starting school.

I have had the privilege of studying the violin and other instruments with outstanding teachers. These have included my mother, Edward Pales, Nina McGowan, Harry Greenburg, Paul Sladek, Michael Davis, John Wilcox, Christopher Wu, Huang Wuang Gi and others. I’ve also participated in numerous masterclasses with world-class musicians. I hold a Bachelor’s and a Master’s degree in Music Performance from Youngstown State University, where I actively performed with the Dana Symphony Orchestra, the Dana Chamber Orchestra, the Dana Opera Orchestra, the Dana Composer’s Ensemble, the Dana Early Music Ensemble, the Dana Graduate Quartet and many other ensembles. I was privileged to serve as concertmaster of the Dana orchestras for much of the time I attended the Dana School of Music and to be featured as a soloist on many performances. In addition to focusing on performance while a student, I studied composition and have been composing and arranging music for more than 25 years.

Extensive experience performing professionally with orchestras, chamber ensembles and as a soloist and have been doing so since 1988. I have been a member of various orchestras, such as the Youngstown Symphony Orchestra and the Warren Philharmonic, and have held the position of concertmaster with several orchestras. I have been a featured soloist many times with the Ashtabula Area Orchestra, the Greenville Symphony and the Youngstown New Music Festival Orchestra.

My siblings and I have been performing together since 1980, and this has been my greatest musical satisfaction. In the early 1990’s, we founded the Howard Report (a.k.a. the Howard String Quartet). As a member of the Howard Report, I have performed traditional classical music from the Middle Ages, Renaissance, Baroque, Classical, Romantic, 20th-century and Contemporary periods as well as experimental, jazz, rock, bluegrass and other styles of music.

For nearly 20 years, I worked diligently and simultaneously at the elementary, middle and high school levels at motivating students to reach their true potential. From the small beginnings of a 10-member group, I expanded the orchestra to include more than 130 members by inspiring the love of music in students and parents alike.

Since 1990, I have been successfully providing private music instruction to students of all ages and levels, from preschoolers to graduate students, in Steubenville, OH and the surrounding areas. I am a serious student of string pedagogy and have studied a variety of works on the topic, including those by Ivan Galamian, Leopold Auer, Kato Havas and others.