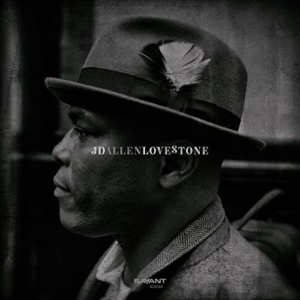 A major tenor-saxophonist since the turn of the last century, JD Allen performs a set of vintage ballads on Love Stone, his 13th CD as a leader. Since he is generally a hard-charging soloist who mostly performs originals, Love Stone is a real change of pace for him.

J.D. Allen takes all of the nine ballads at slow tempos (even "Put On A Happy Face" and "Gone With The Wind"), drawing out the beauty of the melodies and largely letting the music speak for itself through his tone. He digs into such tunes as "Strangers In Paradise," "Until The Real Thing Comes Along," "Prisoner Of Love," "Why Was I Born" and even the ancient folk melody "Come All Ye Fair And Tender Ladies." Allen learned the lyrics to each song (parts of which are reprinted on the inner sleeve) and puts plenty of honest feeling into his interpretations.

It takes a lot of maturity and self-restraint in order to play the music this way, without feeling compelled to give each song a solo filled with double-time runs. While Ellman also takes solos (which stray a bit more from the themes), Love Stone sticks to a quiet romantic mood. Play Love Stone at a low volume and it works well as background music, but turn up the volume a bit and one can hear thoughtful and very subtle improvising by a masterful tenor-saxophonist.

Love Stone, put out by the Savant label, is available from www.jazzdepot.com.