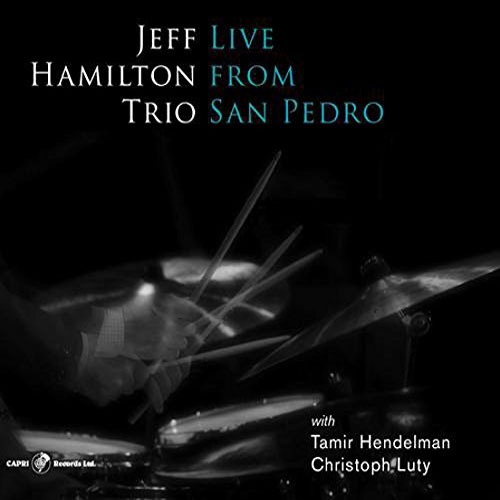 "The joy is evident in the music itself.  Hamilton, Hendelman and Luty have a sublime rapport."
-     Bobby Reed, DownBeat Magazine Editor's Pick

Little did anyone imagine that it would take a masterly drummer to pick up the mantle of the late, great Oscar Peterson as a leader of outstanding piano, bass and drum trios. Still, those with attuned ears will recognize that JEFF HAMILTON has assembled one of the most meticulous and exciting small ensembles of present day jazz. With the virtuosic pianist TAMIR HENDELMAN and the redoubtable bassist CHRISTOPH LUTY working in swinging tandem alongside him, Hamilton-one of the most acclaimed drummers of the past five decades-reasserts his role as an invaluable bandleader.

LIVE FROM SAN PEDRO, available FEBRUARY 16, 2018 via Capri Records, is proof that the chemistry between these three equally gifted and assertive players remains unabated 17 years into the group's existence. Nodding to the grand tradition that predates them, yet eager to put a fresh face on the musical proceedings, the Hamilton trio stakes its place as a classic ensemble within the hallowed history of piano trios.

Captured at a single night's performance at the Alvas Showroom in San Pedro, California, the trio dives deep into an imaginative repertoire that includes bop standards ("In Walked Bud"), a beloved ballad ("I Have Dreamed"), reworked show tunes ("Gary, Indiana"), a classic from the Ahmad Jamal playbook ("Poinciana") and a host of original tunes from group members and others including John Clayton and Joe LaBarbera. The set demonstrates the indivisible unity that the threesome has achieved, as well as the individual virtuosity of each distinguished trio member. While not overtly resembling the trios of Oscar Peterson, the Hamilton trio shares the same rigorous adherence to stop-on-a-dime arrangements, careful dynamics and perfectly framed improvisations.

"He's a musician first and foremost, always eager
to serve the music, not to make the music serve him."

While asserting his leadership through his extraordinary rhythmic control, not to mention his exquisite taste, Hamilton is the opposite of a grandstanding percussionist. As Geoffrey C. Ward has written, "He's a musician first and foremost, always eager to serve the music, not to make the music serve him." One of the great practitioners of the art of brushwork, Hamilton gets to exhibit his mastery throughout the recording; his feature, "Brush This," composed by the bassist John
Clayton (Hamilton's cohort in the Clayton-Hamilton Jazz Orchestra) is a special treat. His equally renowned stick work is also abundantly on display. With Hamilton navigating the trio through its paces, and Hendelman and Luty locking in with communal exactness, the band becomes a well-oiled, yet creatively inspired, swing machine.

One of the giants of mainstream jazz drumming, JEFF HAMILTON has been heard with the big bands of Woody Herman and Count Basie, and as a member of the popular L.A. 4, as well as with such icons as Ella Fitzgerald, Ray Brown, Monty Alexander and Oscar Peterson. In addition to his work with the Clayton-Hamilton Jazz Orchestra, Hamilton has appeared with Diana Krall both in performance and on recordings. Live from San Pedro is his third Capri Records album with the Jeff Hamilton trio.