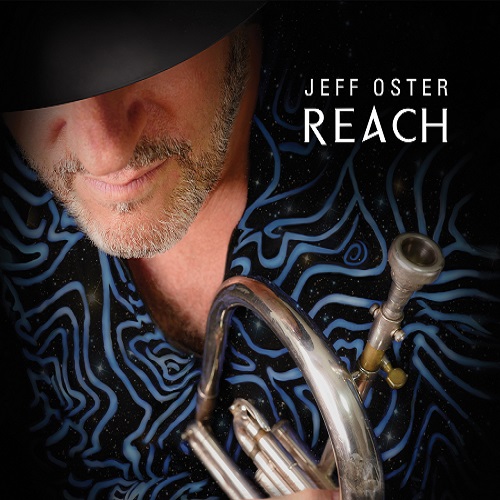 For Oster and his chief collaborator/album producer Ruslan Sirota (who also plays piano, keyboards, guitar and provides vocals), the title Reach doubles as a powerful mission statement. It means breaking from Oster’s past tried and true studio approach of the past and engaging in a deeper exploration of the horn player’s artistry. Over the course of nine tracks, the result is a transcendent chill/ambient/new age meets sensual and grooving jazz/world fusion vibe where truly and radically, there are no creative boundaries. The first single from Reach is “Troppo Y Boffo,” a densely percussive Jobim-inspired dance jam filled with the spirit of Rio.

A freewheeling spirit, being so beautifully connected to the unexpected, flows through every track on Reach. With previous albums, Oster would make elaborate home demos, creating lead horn melodies and counterpoint harmonies over loops and tracks and bringing those into the studio where he hired what he calls a “musical fantasy camp” of studio musicians to help him realize his vision – including, over the years, all-stars like T-Bone Wolk, Keith Carlock, Chuck Rainey and Bernard Purdie. These recordings helped establish Oster as a major force in new age music, and have made him a four time ZMR Album of the Year winner, with numerous #1’s on NPR’s influential “Echoes” program and two wins for Best New Age Song at the Independent Music Awards.

There was creative incentive for both to move past their creative comfort zone. Ruslan was eager to get some of his L.A. session pals involved, but before that, he and Oster sought the right inspiration for the project. They did a Skype listening session, sifting through the hippest and trippiest ambient/downtempo chill music, including artists featured on the Groove Salad outlet on Soma FM. The idea was to choose a playlist and try to capture the feeling of those tracks in studio jam sessions – and have Oster add his horn melodies later. Over the course of eight hours, the crew of Robyn Gosh (guitar), Benjamin J. Shepherd (bass), Tamir Barzilay (drums), Pete Korpela (percussion), Jenni Asher (erhu), Ravichandra Kulur (Indian Flutes) and Drew Allsbrook (vocals) vibed under Sirota’s direction. He would talk to the musicians and often play keyboards as they were playing, calling out changes to keep up the flow.

“There is something truly liberating about Reach,” says Oster. “As the title implies, I may not know where my life’s next destination is, but I do know there’s beauty in reaching for something I’ve never done musically to capture the essence of a live performance. I have always sounded much different onstage than in my recorded music, and working with Ruslan and his incredible musicians opened me up to exploring fresh territory. I’m classically trained, and the charts I usually write for my trumpet and flugelhorn leads are very structured. So literally taking this one track at a time, thriving in the spirit of spontaneity of building from the ground up, then whittling everything down into viable songs, was a very fulfilling experience.”

For more information please go to: