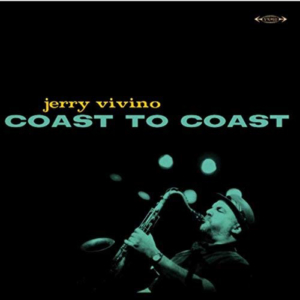 Jerry Vivino is perhaps best known for playing tenor with the Basic Cable Band, the house group for the Conan O'Brien Show. The older brother of guitarist Jimmy Vivino, he grew up in a very musical household. While he started out listening to funk, rock and r&b, Vivino eventually turned much of his listening towards jazz, loving Stan Getz's playing. A professional since the 1970s, he has performed with a wide variety of top artists (including Tony Bennett, Ray Charles, Bruce Springsteen, James Brown and Keely Smith), co-led the Vivino Brothers Band, and been featured playing all types of reeds on a countless number of soundtracks and studio work.
Coast To Coast is Vivino's fifth recording as a leader. While he plays alto flute and soprano sax on one song apiece, otherwise he is heard on tenor. His large sound at times recalls Coleman Hawkins and Illinois Jacquet but he basically sounds like himself. The ten selections, although taken from several different sessions, feature him taking consistently relaxed and thoughtful solos even when the tempos are a bit fast. Other than three standards, the songs are all his originals and are often based on the blues or utilize familiar chord changes. The music easily fits into the mainstream of 1960, being mostly lightly swinging and melodic performances.
Two songs feature Vivino in a quintet with the excellent trumpeter Ron Stout and the well-featured pianist Andy Langham whose fills and accents (in addition to his solos) add a great deal to the music. The same group without Stout pays tribute to Sam Butera on "Sam I Am."
The great veteran guitarist Bucky Pizzarelli (91 at the time) joins Vivino for a swinging rendition of 'Honeysuckle Rose" that features the leader's easy-going vocal, "Body And Soul," and the original "Paterson." Vivino plays some excellent soprano on his lyrical "Miracles" and is in fine form on flute during "Here's That Rainy Day." The remaining two pieces, which date from around 2007-08, match Vivino with the late trumpeter Lew Soloff; check out Soloff's first long note of his wild solo on the uptempo "Lew's Blues."
All in all, this is a fun set of straight ahead jazz that features Jerry Vivino in top form. It is available from Blujazz and www.jerryvivino.com.