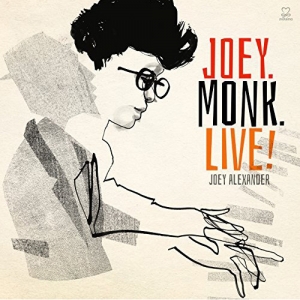 2017 was Thelonious Monk's centennial, a year in which there were quite a few recorded tributes to the unique pianist-composer. One of the last to be released is by pianist Joey Alexander, who was born 21 years after Monk's passing in 1982.

Still just 14, the remarkable Alexander was captured live in concert last June performing seven Monk compositions in the Appel Room at Jazz At Lincoln Center. While he remains young enough to be considered a child prodigy, from the start of his career Joey Alexander has played with such maturity and inventiveness (not to mention impressive technique) that he has made his age irrelevant. That is, once one gets over the shock of seeing someone this young playing at such a high level. Musically, Alexander could pass for 30. One cannot imagine how he will sound after another ten years of practice.

Joey, Monk, Live begins with the pianist's unaccompanied exploration of "'Round Midnight. The first two and a half minutes are largely a free improvisation although taken melodically. As the theme emerges, Alexander hints at Monk's piano style while still displaying his own musical personality.

Bassist Scott Colley and drummer Willie Jones III. make the group a trio on all of the other selections except the closer. After Alexander begins "Evidence" with dense chords, the piece lightens up and the musicians swing together, with each of the players getting an opportunity to solo. Alexander and Colley share the melody and the spotlight throughout Monk's waltz "Ugly Beauty." Colley plays thoughtful lines while Alexander solos on top, sounding as if he is thinking aloud at the piano. The piece concludes with some playful interplay.

"Rhythm-A-Ning," which starts with a brief drum solo, has Alexander really digging into the tune, coming up with lots of fresh ideas and using space well while cooking. "Epistrophy" is given a particularly adventurous treatment during its first half before the tempo doubles and it becomes a romp. The musicians all stretch the song in exuberant fashion. "Straight No Chaser," which was the scheduled set closer, has Alexander creating a relaxed and sometimes out of tempo solo over the hard-swinging bass and drums. For an encore, he performs an unaccompanied and melodic version of "Pannonica."

Taken as a whole, Joey, Monk, Live would be considered an impressive effort even if Joey Alexander was out of high school. He captures the essence of Thelonious Monk's music but in his own style. This worthy effort is available from Motema (www.motema.com).